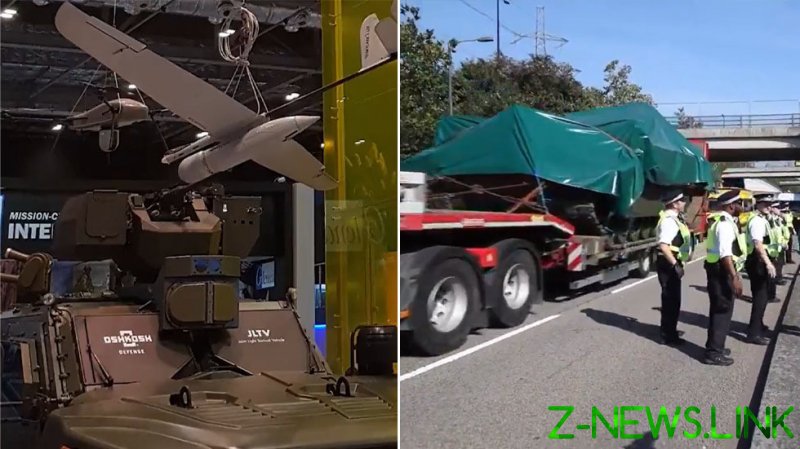 Declassified UK, a British investigative journalism website, released a video on Friday of protesters being detained by police officers while arms trucks transported weapons set to be displayed at the Defense and Security Equipment International (DSEI) arms fair.

The biennial event is set to take place from September 14-17, but the massive equipment has been moved to the venue in recent days. DSEI has been publicizing the weapons fair under the slogan “Powering progress – Defining your future.”

Activists blocked entrances to the venue in London’s Docklands and scaled tanks, other photos and videos posted online showed.

Sarah Wilkinson from Palestine Action told Declassified that the only purpose of the weapons was “to slaughter” innocent civilians. “It’s profiting out of death and it has no other purpose,” she said. The video shows multiple British police officers detaining resisting protesters.

Jeremy Corbyn, the former leader of the British Labour Party, has also joined those protesting the fair, tweeting bluntly on Friday: “This arms fair should not go ahead.”

“The weapons sold at fairs such as these are used to target civilian populations around the world,” he added in another tweet, sharing a motion presented to Parliament calling for the event to be cancelled.

London Mayor Sadiq Khan has also spoken out about the event, saying last month it has “no place” in the city.

The Campaign Against Arms Trade (CAAT) and Extinction Rebellion are among the other groups opposed to the fair.

The UK has sold over £20 billion worth of military equipment and services to Saudi Arabia since 2015, the group said.