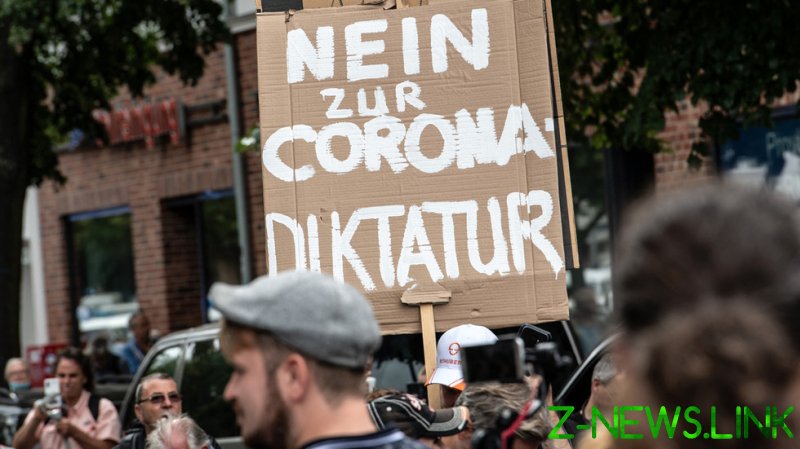 The results of the study by the Federal Association of Departments for Research and Information on Antisemitism (RIAS) were reported by the Welt am Sonntag newspaper.

The watchdog recorded 561 pandemic-related anti-Semitic incidents across Germany between March 2020 and March 2021. The majority of them (60%) occurred during public protests, during which Jews were blamed for the coronavirus and subsequent lockdowns.

In other instances, Jews described being harassed and insulted in supermarkets and other public spaces, where strangers accused them of bringing the disease into the world. One such incident was reported by the media in February, when flyers found on a tram in Cologne linked the pandemic to “the Jewish problem.”

“The protests on the first weekend of August have shown the continuation of anti-Semitic sentiments at gatherings against the measures aimed at containing the coronavirus pandemic,” Daniel Poensgen, a researcher at RIAS, told the paper.

Protesters against the lockdowns in Germany and elsewhere have been seen sporting mock yellow Star of David badges and armbands similar to the ones Jews were forced to wear during World War II. Jewish groups find the usage of such imagery offensive and tantamount to the trivialization of the Holocaust.

Those protesting against quarantine restrictions and vaccination “cannot pretend they are in the Resistance or they are persecuted compared to the Jews in the Nazi period,” German anti-Semitism expert Hajo Funke told the Jewish Telegraph Agency in May, adding that such comparisons were historically wrong and dangerous.

In a similar vein, the US-based anti-Semitism watchdog, the Anti-Defamation League, issued a statement in June condemning the usage of Holocaust imagery in rallies in the UK and France.

The comparison to the suffering of Jews during WWII in the context of the pandemic is “not only an act of moral outrage, but also represents an attempt to downplay the enormity of the Holocaust,” the group said.

In May, yellow ‘Jewish stars’ were banned from anti-lockdown demonstrations in Munich, following a request by Germany’s anti-Semitism commissioner, Felix Klein.

Klein’s post was created in 2018, as the federal government was looking for ways to curb the rise in attacks against the Jews.

Using yellow ‘Jewish stars’ as symbols of resistance against quarantine measures has led to controversies in other countries as well. Last month, Washington State Representative Jim Walsh apologized for wearing a star on his shirt during a meeting with conservative activists.