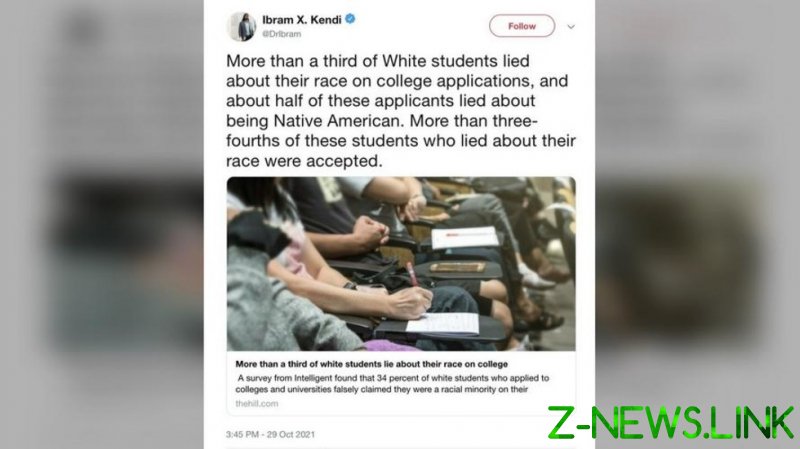 The episode began with Kendi, the Boston University professor whose anti-racism institute was funded by Twitter CEO Jack Dorsey, reacting on Friday to a media report indicating that 34% of white US college applicants had lied about their race on applications to improve their chances at gaining admissions and financial aid. As Kendi’s tweet noted, more than three-fourths of the students who pretended to be non-white were accepted into their targeted college.

But that message apparently didn’t hit the intended mark. Online critics, such as authors James Lindsay and Chad Felix Greene, argued that Kendi accidentally admitted non-whites are favored in college admissions – contrary to his teachings. The professor has built a career on telling Americans that whites are systemically privileged and should be discriminated against to remedy past injustices.

As Greene put it, acknowledging that students hid their whiteness to get ahead amounted to “collapsing your entire worldview into a giant sinkhole.”

The tweet was soon deleted, which only fueled the social media fire. Twitter users peppered Kendi with questions as to why he deleted his post and suggested that removing the message proved that he realized the report “didn’t advance his argument that whites are privileged in every way.”

Kendi responded by framing the ridicule as he frames everything that doesn’t fit his narrative: racist. When conservative journalist Jack Posobiec pointed out on Saturday that the professor had undermined his own arguments and deleted the tweet, Kendi replied, “They lie about what I said to defend the lying of white college applicants.” He ratcheted up the rhetoric on Sunday, after Posobiec bragged that he “broke Kendi,” likening the journalist to a slave owner.

“His broke reference has a long history within racist structures,” the professor said. “White enslavers boasted of breaking black people… The resistance never stopped then and it won’t stop today.”

When another observer argued that Kendi was using “broke” out of context, he likened Posobiec’s tweet to violence. “A white man is attacking a black person with lies, which are violence,” he said. “The black person resists. The white man keeps attacking until he declares he broke the black person. That’s the context. Seek a book about slavery.”

But that argument, too, seemed to flop, with observers saying Posobiec merely repeated Kendi’s own statement – hardly a lie – and the professor’s overheated reaction prompted the journalist to declare that he broke Kendi, as in breaking a machine. “That tweet has absolutely wrecked your grift forever,” one commenter tweeted.

Kendi, who has authored several books on anti-racism and maintains a heavy schedule of speaking engagements, still wasn’t giving up on his premise. “Here is their tortured line of thinking: When White applicants think they have an advantage by lying about being a person of color, then that means they do have an advantage, which then means structural racism doesn’t exist,” he said.

That notion flopped even with another anti-racism educator, Chloe Valdary. “I’m sorry, this makes no sense,” she said. “If you can get into a college by lying and saying that you’re black, then that means that being black equals a weighted advantage in this context.”