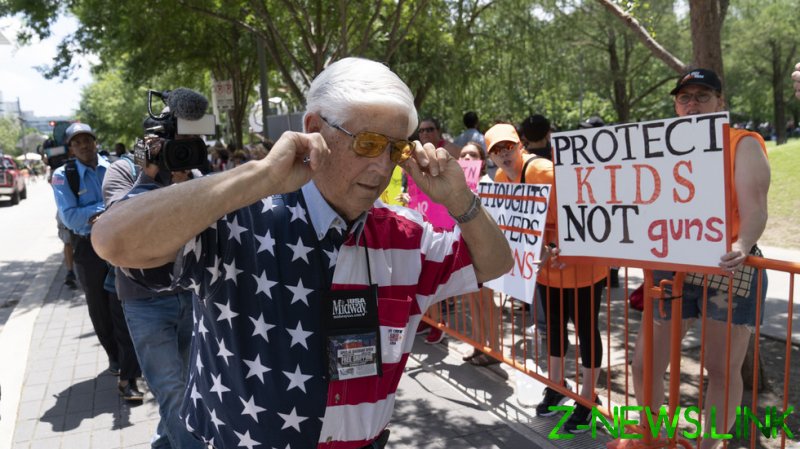 Anti-gun protesters picketed the NRA’s annual convention in Houston, Texas, on Friday, demanding the government ban so-called ‘assault weapons.’ Despite the convention coming three days after a shooter killed 19 children and two adults in a Texas elementary school, speakers and attendees at the convention insisted that they wouldn’t surrender the right to bear arms.

A teenage gunman shot and killed 21 people at an elementary school in Uvalde, Texas, on Tuesday, before being shot dead by an off-duty Border Patrol agent. On Friday, meanwhile, 280 miles (450 km) away in Houston, the National Rifle Association (NRA) kicked off its annual convention.

The event, which always draws criticism from anti-gun groups, attracted several hundred protesters. Holding signs accusing the NRA of having “Blood on [its] Hands,” they heckled attendees and chanted “shame” at those entering the gun lobby assembly. Across the street, a group of children stood in silent protest, with the names and images of those killed in Uvalde hanging from their necks.

Another group carried a child-sized coffin around the convention center.

The protests drew some familiar names from liberal politics. School shooting survivor-turned-activist David Hogg joined demonstrators outside the convention and announced a slew of anti-gun marches for next month. Becky Pringle, president of the National Education Association, the nation’s largest teachers union, rejected Republican arguments that teachers should be armed to prevent school shootings.

‘Assault weapons’ is a controversial term. While the gun industry says it refers to fully automatic firearms, which have been banned in most cases since 1986, the anti-gun lobby uses the term to describe long rifles styled like military firearms, such as the semi-automatic AR-15. Such weapons were banned by the administration of former President Bill Clinton in 1994, but that ban expired in 2004, and an attempt in 2013 during Barack Obama’s presidency to reinstate it failed. 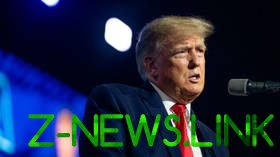 In the overwhelming majority of gun crimes in the US, handguns, and not rifles such as the AR-15, are used, with most of them owned illegally.

Since Joe Biden took office last year, he has placed regulations on certain pistol grips and cracked down on the sale of untraceable ‘ghost guns,’ but has not pushed Congress to enact a sweeping ban on any kind of firearm.

The slaughter in Uvalde, the US’ deadliest school shooting since the Sandy Hook massacre in 2012, has reinvigorated a nationwide debate on gun laws, with politicians, entertainers, and even sports franchises demanding the Second Amendment be curtailed.