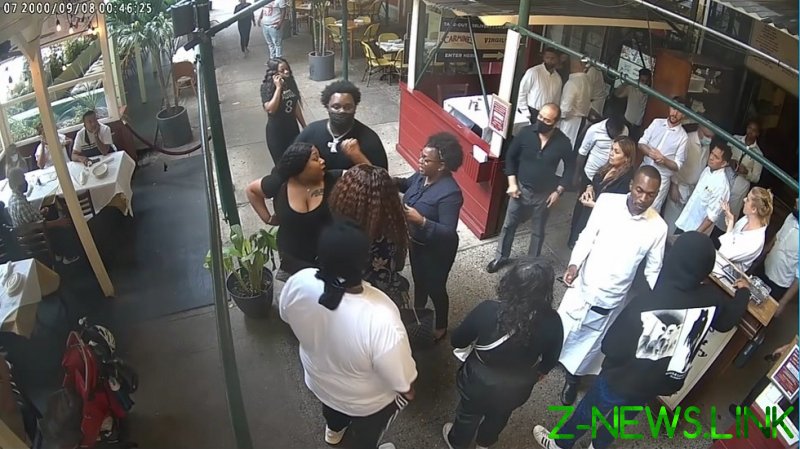 Activists with Black Lives Matter of greater New York picketed the Italian restaurant on the Upper West Side on Monday night, confronting both staff and patrons and calling Carmine’s “racist” and “fascist” over last week’s incident.

“I charge Carmine’s with trying to cover up their employee’s actions by using the vaccination passport as an excuse,” said BLM NY leader Hawk Newsome, who led the protest.

New York City was the first jurisdiction in the US to require proof of vaccination for entering restaurants and other venues. The policy went into effect on September 13. Just three days later, NYPD arrested Sally Rechelle Lewis, Kaeita Nkeenge Rankin and Tyonnie Keshay Rankin, and charged them with assault and criminal mischief after a video emerged of them assaulting a Carmine’s hostess.They were released without bail.

The three women, residents of Houston and its suburb of Humble, were originally described as just “Texan,” prompting an outpouring of online vitriol, normally reserved for Republicans. The moment it emerged they were black, however, the story changed.

Rankin’s attorney told the New York Times that the physical assault followed the hostess calling the group a derogatory racial term – something Newsome seemed to take at face value.

Carmine’s owner Jeffrey Bank, however, called that statement “false” and the attack on his employees “entirely unprovoked.” In response to the BLM protest, Bank released the surveillance footage of the incident to the press on Tuesday.

“At no point did the women mention that any of the hosts ever made a racial slur. Nor did the women say that to the police officers who arrested them. Nor did anyone hear any such slur,” Bank told the New York Post. “This is because none of our hosts — all of whom are people of color — ever uttered such a slur.”

The employees that were violently attacked were black, Latino and Asian American, he said. The tapes also show that the three Texan women were allowed in after showing their vaccination papers, but got violent after the hostess turned away one of the men seeking to join them, who did not have a valid pass.

While Hawk Newsome focused his wrath on Carmine’s, his wife and fellow BLM leader Chivona took aim at the vaccination pass policy itself.

“We’re putting this city on notice that your mandate will not be another racist social-distance practice. Black people are not going to stand by, or you will see another uprising. And that is not a threat; that is a promise,” said Chivona Newsome. “The vaccination passport is not a free passport to racism.”

Claiming that 72% of New York City’s black residents age 18-44 are unvaccinated, Chivona Newsome asked “what is going to stop the Gestapo, I mean the NYPD, from rounding up black people, from snatching them off the train, off the bus?”

Co-founder of Black Women’s March, Kimberly Bernard, said the protest was “serving notice on the mayor, on the governor, on the restaurant industry that we will not allow for you to use this pandemic, vaccination cards, and masks as another reason to be racist, to put us in prison.”

At the time the measure was announced, in early August, critics pointed out the comparatively low rate of vaccination among African-Americans and said the policy would have a disparate impact, fitting the textbook definition of racism often used by the courts.

Democrat Mayor Bill De Blasio ignored the critics, however. Asked about it, the White House said cities and states “should be able to take steps to incentivize more people getting vaccinated.”