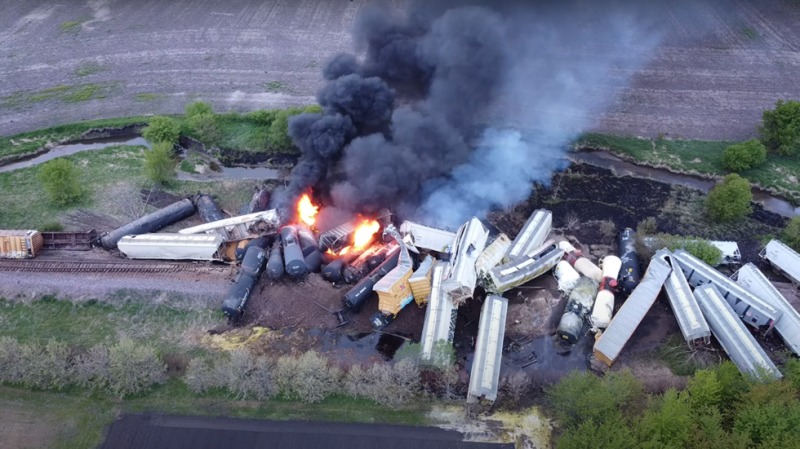 The derailment happened around 2pm Sunday, on the outskirts of Sibley, a small town of roughly 2,700 residents in the far northwest Iowa on the border with Minnesota. There were no reported injuries, but part of the town received evacuation orders over a “HAZMAT train derailment and fire,” as first responders sealed off the area within 5 miles of the crash.

The train was carrying fertilizer and various chemicals used in its production, such as highly volatile ammonium nitrate, according to local media reports. Dozens of crippled cars piled up on top of one another, some of them on fire, with a large cloud of black smoke above, could be seen in photos and video shared online.

The full scale of the incident and the ensuing emergency response operation was not immediately clear, but according to a video shared by Nathan Minten, some of the cars were still on fire after the sunset.

“If residents are sheltering in their homes, it is recommended to have them open their windows on both sides of their homes and have people positioned in the middle of their homes,” a local emergency center said in its warning, according to radio station KIWA.

In a brief statement, Union Pacific spokeswoman Robynn Tysver confirmed that at least 47 cars went off tracks, adding that the incident was under investigation and that the railroad was “working with local authorities.”

This is the second such incident in roughly 24 hours, and third in less than a week in the US. Around 1:30pm Saturday afternoon a Union Pacific train crashed some 120 miles away, just across the border in Minnesota. That incident also caused a hazardous materials team response, after a hydrochloric acid leak was detected. On May 11, yet another cargo train crashed some 450 miles away in central Illinois, with hazmat teams detecting no chemical leaks at the time. The cause of either derailment has yet to be revealed.