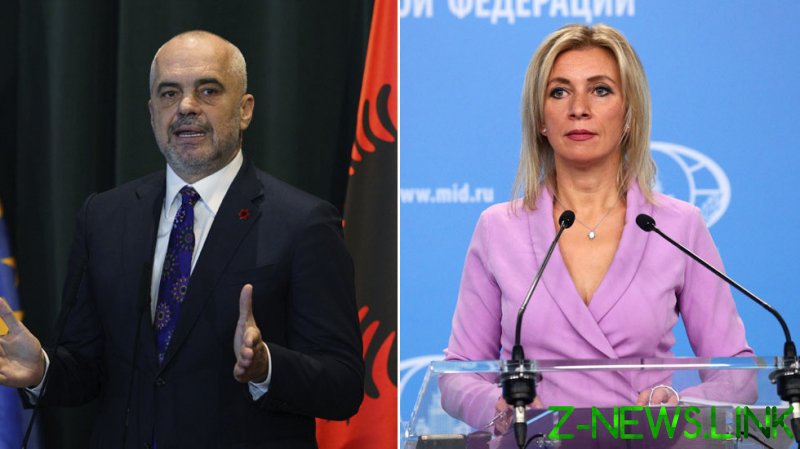 On Sunday, Russia’s Foreign Ministry spokesperson Maria Zakharova hit out at comments from Albanian Prime Minister Edi Rama over the country’s potential union with the Kosovo, which broke off from neighboring Serbia in 2008. According to Zakharova, this goes against a long-standing treaty and could heighten tensions in the region.

“We consider the statement of the Prime Minister on the unification of Albania and Kosovo absolutely unacceptable. The promotion of plans to create a ‘Greater Albania’ grossly contradicts the provisions of UNSCR 1244 and undermines stability in the region,” she said, adding that “we count on an adequate reaction of the Western guardians of the project of Kosovo ‘statehood’ to this blatant provocation.”

On Saturday, Rama announced that his main goal during his political career is the eventual unification of Albania and Kosovo – an aspiration that Moscow said would violate agreed conditions between countries in the region.

“It is especially strange to hear that the violation of the fundamental document for the Kosovo settlement is declared as the key goal of the political career of the leader of one of the countries of the Balkan region,” Zakharova also said in the statement.

On Monday, Serbia’s Interior Minister, Aleksandr Vulin, said that the country will start to receive the latest new-and-improved weapons and equipment from Russia for Serbian military and police units. Without going into too much detail about the specific weaponry that would be imported from Russia, Vulin did admit that Serbia’s defense “will become much stronger.”

In September, the country’s president, Aleksandar Vučić, said that military deliveries from Russia are expected to arrive by the end of the year, including upgraded anti-tank missile systems and anti-aircraft guns.

Tensions on the Serbia-Kosovo border heated up again in September, leading to Moscow calling on NATO to step up and deescalate the situation. Conflicts in the region have run high ever since Kosovo declared independence from Belgrade in 2008, in a move not recognized by Moscow or by much of the world. The clashes have, however, been reignited after officials in Kosovo prohibited cars with Serbian license plates from entering into its territory, forcing drivers to pay for temporary registrations.

On Monday, only weeks after tensions between the nations came to boiling point, Serbia said that it will neither join NATO nor back anti-Russia sanctions from the US-led bloc. “Serbia will never support sanctions against Russia or anti-Russian hysteria. History has shown that every Russophobia is also Serbophobia,” Interior Minister Vulin said in an interview, adding that “As long as Serbia is ruled by President Vucic, and as long as I am in the security structures, Serbia will not become a NATO member, and we will very strictly take care of maintaining our military neutrality.”