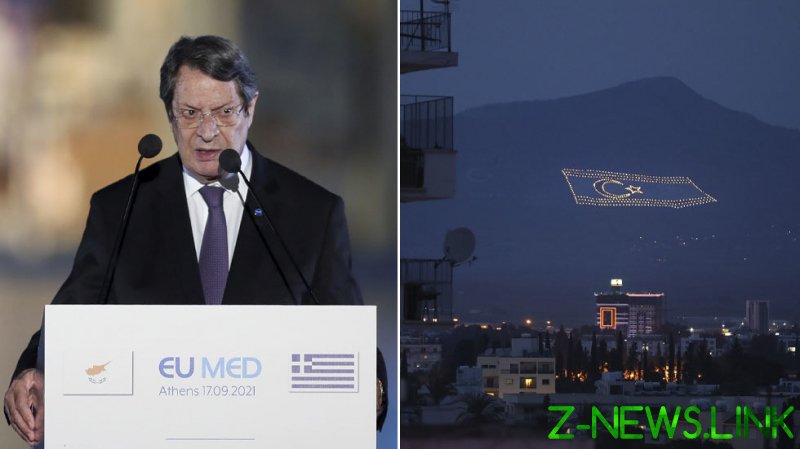 In a short statement on Sunday, a spokesman for the Turkish Ministry of Foreign Affairs called parts of a declaration adopted during the EU summit in Athens “biased, lacking vision, and disconnected from reality, as was the case in previous years.”

Signatories should “drop their one-sided and biased attitude” and stop blindly following Greece and the Greek Cypriot Administration “under the pretext of solidarity,” Tanju Bilgic added.

The rebuke from Ankara came in response to the Friday summit of EUMED, a grouping of EU members that border the Mediterranean Sea. This year the group was expanded from seven to nine members, after Croatia and Slovenia joined it. It also includes France, Greece, Italy, Malta, Portugal and Spain, as well as the Greek government of Cyprus.

The Eastern Mediterranean island has been divided into ethnic Greek and Turkish sectors since the 1970s, in an unresolved territorial dispute that has pitted Greece and Turkey firmly against each other. The Greek Republic of Cyprus acceded to EU membership in 2004, while the Turkish Northern Cyprus remains unrecognized by any UN nation except Turkey.

The declaration signed in Athens called on Turkey to “accept the invitation by [Greek] Cyprus to engage in dialogue” on various issues. It also condemned “Turkish illegal actions” in Varosha, an abandoned district in the city of Famagusta that serves as a focal point of Greek-Turkish confrontation on Cyprus.

On the migration issues, the document acknowledged that the role of cooperation with “third countries [was] crucial” for handling flows of refugees and of human trafficking. It also highlighted the need to “prevent instrumentalisation of human suffering for political goals” and “orchestrated attempts at irregular crossings.”

Turkey stands accused of using the refugees that it hosts on its territory as a bargaining chip with the EU, threatening the bloc with a border crisis during political stand-offs. Ankara feels justified in such arguments because of the financial burden that the refugees impose on its economy and of the failure of the EU to aid Turkey in dealing with it.

The summit in Athens was the eighth for the EUMED group and was focused on climate change and how it will affect European nations. President of the European Commission Ursula von der Leyen attended the event in person, while President Charles Michel addressed the participants in a video statement.