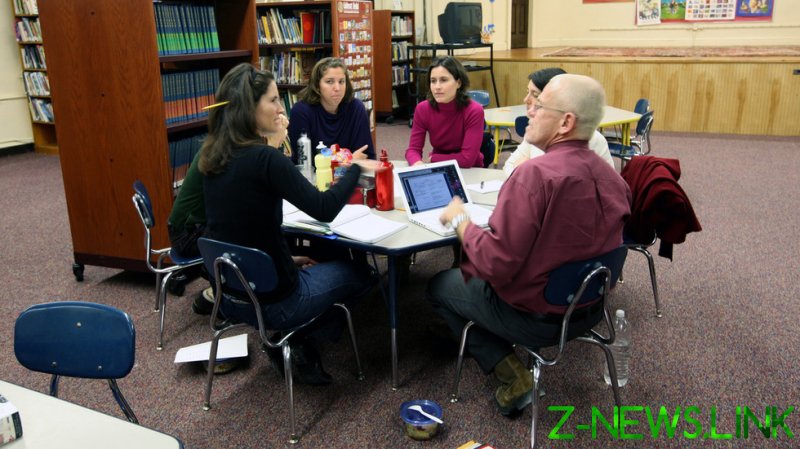 Once upon a time in America, before a tiny faction of radical progressives hijacked the Democratic Party, local school board meetings were dull and tedious affairs where crickets could be heard from inside of the mostly empty auditoriums. No more.

These days, the meetings are sold-out shows with enraged parents speaking out against what they believe is the indoctrination of their children to ‘cultural Marxist’ teachings, primarily on transgender beliefs and critical race theory, while gasping for precious air behind surgical masks. Indeed, so electrified are the conferences that the National School Boards Association called on the Biden administration to protect teachers and schools from the possibility of – long drum roll, please – “domestic terrorism.”

“Coupled with attacks against school board members and educators for approving policies for masks… many public school officials are also facing physical threats because of propaganda purporting the false inclusion of critical race theory within classroom instruction and curricula…,” the organization said in the letter.

“As these acts of malice, violence, and threats against public school officials have increased, the classification of these heinous actions could be the equivalent to a form of domestic terrorism and hate crimes.”

Personally, I have watched dozens of these school board meetings and although they can become very vocal and emotional, there have never been physical acts of violence on the part of the attendees, and certainly nothing that would warrant the NSBA to toss around terms like “domestic terrorism” and “hate crimes.” There is a mountain of difference between distraught parents who want some say as to what is being taught to their children inside of the classroom, and fanatical groups of malcontents carrying out indiscriminate acts of murder against innocent people to achieve their objectives.

Of the footnoted articles cited by the NSBA to build their case that American parents are borderline jihadists, not one provides a single instance of violent behavior. Instead, they link to media reports with the following headlines: “Editorial: Mob’s actions at school board meeting unacceptable,” says The Herald; “Protesters disrupt Poway Unified board meeting,” complains the San Diego Union Tribune; “Sarasota school board may limit public input after some meetings get disorderly,” rails the Sarasota Herald-Tribune; “Anti-mask crowd disrupts Gwinnett school board meeting,” reports the Atlanta Journal-Constitution; “School board meeting turns contentious over Covid-19 policies,” according to the Las Vegas Review-Journal. In other words, a stinky bucketful of media-generated tripe, but no smoking gun, as it were.

Conforming perfectly to our broken cancel culture, the teacher’s union is screaming ‘fire’ in a theater just because newly motivated parents are getting “disorderly,” “disruptive” and – heaven forbid – “contentious.” This is a typical reaction on the part of modern liberals whenever someone dares to challenge their belief system – they roll on the ground, fake a convulsion and portray themselves as victims, when in reality it is the children and parents trapped in these tyrannical school systems who have the best case for victimhood.

Few parents want their tax dollars spent to have their children sitting through lessons devoted to transgender studies (a topic that is never mentioned in the NSBA letter, incidentally, which is strange given that the teaching of transgender lifestyles is often a major point of contention at these meetings), which teaches that gender is a fluid social construct that a person can change. Yes, people should be able to do what they want with their bodies, and live their lives as they see fit, but many parents believe their young and impressionable children should not be introduced to such complicated ideas until much later in life. It seems to be a reasonable request.

Another flash point among parents is the teaching of critical race theory (CRT), which argues that white people are a knuckle-dragging tribe of racists who enjoy a carefree life of privilege conferred upon them by a culture predicated on ‘white supremacy’. The NSBA, however, flat-out denies that CRT is taught in the US public school system. That appears to be a bald-faced lie or a serious oversight.

There are a variety of teaching kits being used to promote CRT, like the so-called ‘Equity Collaborative’,which defines racism as “an inherent part of American civilization, privileging white individuals over people of color in most areas of life, including education.” [p.14]

In fact, it would be very surprising if public schools districts were not teaching CRT, albeit quietly under a different name, since one of Joe Biden’s first acts as president was to rescind Donald Trump’s campaign to eliminate the teaching of systemic racism, white privilege and other race and gender issues.

In addition to the teaching of these fiercely controversial topics, the shelves in some school libraries are reportedly being stuffed with books devoted to pornography and pedophilia. To get a sense of the frustration that many parents feel about this, which should be easily predictable, take a moment and watch this video [WARNING: GRAPHIC LANGUAGE, ILLUSTRATIONS]. Ironically, the school board officials asked the parent at the podium to stop reciting passages from the graphic book because “there are children in the audience.” Yet these same hypocrites apparently have no problem making the material freely available inside of the schools.

It goes without saying that resorting to violence is never the way to affect change. Yet, at the same time, declaring that your opponent might resort to violence without providing a shred of evidence that that is the case, is also a vile, underhanded tactic by the NSBA, which seems desirous to shut down debate, returning once again to their happy, debate-free meetings.

Labeling parents, who only want the best education for their children, as potential “domestic terrorists” and perpetrators of “hate crimes” marks a despicable new low in the cultural wars now raging through the United States.

What is a possible cure? US school systems need to remember that they rely on taxpayer dollars to keep their doors open. Push people too far – as happened in Des Moines, Iowa after the Ankeny School Community District reinstated mask mandates – and the “mask-crazed parents” just might yank their kids out of school, maybe homeschool them, depriving the district of precious funds. No better time than now to give the US school districts a much-needed lesson in Economics 101.