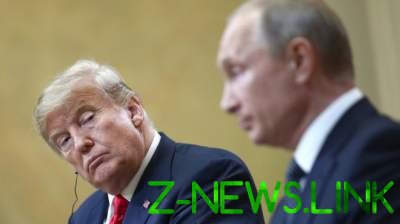 The comedian commented on the meeting.

After meeting the head of the White House Donald trump with the President of Russia Vladimir Putin in Helsinki on the first barrage of criticism. The negotiations were discussed in an American talk show.

So, American TV host Jimmy Kimmel suggested that Putin, instead of the translator has led the negotiations of the hypnotist and Jimmy Fallon (NBC) advised Trump to be careful, because inside the gift ball is the recorder.

“It was the most wonderful day. The President was in Europe, insulted our allies, twisted their nipples, nauskivaya enemies. On Friday he had tea with the Queen. This is an important point. The President went ahead of the Queen, that is not permissible for Royal etiquette. But nothing compares to what happened in Finland. In Helsinki everything just froze. The President of the United States publicly sided with Russia, against its own FBI in the case of cyber attacks during the elections. Trump was meeting with his best friend in the KGB, Vladimir Putin. In yesterday’s interview with CBS he said that this meeting had low expectations (but we have too!)”, joked Kimmel.

See also:  Fox-traveler from London was the new star of the Network

The meeting with Putin was one-on-one with only interpreters and lasted more than two hours. Say, trump wished to be alone with Putin because he doesn’t want his advisers saw him naked, which is natural. Perhaps we need to understand how it all goes, looking at how they went to the press and sat down. Trump slightly winked at Putin right in front of the journalists. Then glanced quickly. It was “thank you, that film nobody saw”… even more amazing. Then there was a joint press conference, in which trump has described the meeting in a historical context,” making fun of Kimmel.

“Our nation fought during the Second world war, having lived intense days of the cold war when the world was not like it is now. USA and Russia were able to maintain a constant dialogue. Our relationship has never been worse than now. However, that all changed about 4 hours ago. Believe me… yeah, all believed. And it is possible that Putin brought a hypnotist instead of the translator” – ironically Kimmel.

See also:  "Fear of bold students", the network is laughing at Putin

The comedian said that more than anything pissed him off when trump was asked about Russia’s role in the attack during the elections of 2016. The FBI, justice Department and even the Secretary of the trump assured without question that it is Russia. And when trump got a chance to publicly denounce Putin’s undermining of our democracy, here are some actions our commander in chief chose to just ask Putin and believe his word.

It was not a good day for trump. We did not see, that Russia had America since the movie “rocky 4″… Donald trump is not only not scolded Putin, but praised Putin for proposals, which is not good for us… trump has gone off the rails,” said Kimmel.

American politicians were not joking – as the opponents of the Democrats and party Republicans have brought down on their President a barrage of criticism.