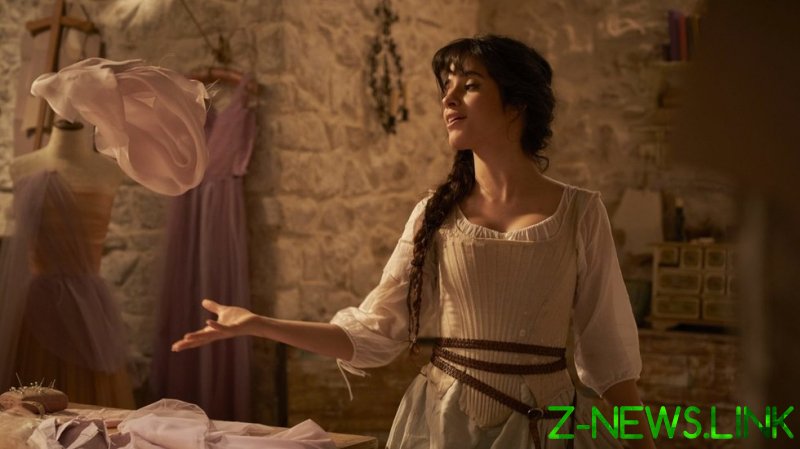 Amazon Studios’ new movie ‘Cinderella’, written and directed by Kay Cannon, is a jukebox musical that sets out to upend the old-fashioned fairytale by injecting a powerful dose of girl power into its traditionalist veins.

Starring pop singer Camilla Cabello, this woke re-telling – now streaming on Amazon Prime – might have been considered ideologically edgy in 1956, but is a bland, flat concoction that looks as unappealing as it sounds.

To promote the new movie, cast members Cabello, Idina Menzel, Billy Porter and James Corden (also a producer of the film) recently got into costume and did a flash mob at various Los Angeles intersections where they sang the grating Jennifer Lopez hit ‘Let’s Get Loud’.

After having seen a video of this occurrence, which included Corden sexually thrusting his hips in a mouse costume, I’ve been, like Winston Smith, haunted by rodent-filled nightmares.

Putting the Cinderella story through the woke wash cycle seems like a painfully typical-for-the-times, Disney Channel-inspired, algorithm-assisted experience. The plot they came up with was that the new Cinderella is a fashion designer who, along with all the other women in the kingdom, is suffering under the patriarchy and its sexist traditions.

As everyone knows, Cinderella is supposed to marry the prince, but in this new wokelandia, she instead literally says, “I choose me!” and decides on her blossoming fashion design career over love. You see, this Cinderella doesn’t want to be confined to the basement or the Royal box. She wants to toss the glass slipper and shatter the glass ceiling. You go, girl!

Of course, Cinderella ultimately gets to have both her career and love when Prince Robert, played by Nicholas Galitzine, who – how do I put this? – doesn’t exactly seem like the type of guy who is into the ladies, and gives up his b*****ks, oops, I mean his claim to the crown, and follows Cinderella in her fashion career.

You’ll be glad to know that Prince Robert’s sister, Gwen, an ambitious Hillary Clinton type bursting with so many great ideas that none of the men ever listen to, becomes ruler of the kingdom. Girl Power!

If that all sounds really egregiously dreadful to you, then you are not alone. The problem with ‘Cinderella’ isn’t just the relentless girlboss bullsh*t, it’s also the fact that the movie looks and feels like a bunch of 10-year-olds lip-synching to the radio as they put on a play in their grandmother’s backyard.

It also has a virtually incoherent script, is amateurishly directed, embarrassingly choreographed and abysmally acted. But besides that, how was the play, Mrs. Lincoln?

A big problem with the film is that its lead, Cabello, is an unappealing and unattractive screen presence who seems less a fairy princess in waiting than a rookie waitress stumbling through her maiden shift at a renaissance fair.

The first 45 minutes of the movie are run-of-the-mill garbage, but then the awfulness goes into hyper-drive when the king of crap arrives, Corden, who in an uncomfortable bit of typecasting plays an annoying fat mouse.

To add insult to injury, at about the same time Porter (acclaimed star of ‘Kinky Boots’ and ‘Pose’) brings his gay minstrel show to the festivities in the form of the character Fab G, who is described in the film’s promotional material as a “genderless fairy godparent”. Fab G is, you guessed it, “FABULOUS!”, but unfortunately is not genderless, as she describes herself as a “fairy godmother” in the film, which horrified me no end as it seems aggressively binary. Cancel ‘Cinderella’ for its binary conformism and trans-hate!

As for the rest of the cast, Pierce Brosnan and Minnie Driver play the king and queen and their work seems to embody the attitude that ‘the mortgage ain’t gonna pay for itself’, which as we all know, it isn’t.

The music in ‘Cinderella’, which features songs from Janet Jackson, Queen, Madonna and Ed Sheeran among many others, falls decidedly flat because the performances are dull and the arrangements so predictable they seem to be done by a second-grade music teacher.

I understand this is the world we live in, and we have to suffer through these uber-woke movies and TV shows that only care about ‘the message’ and not the quality of the product or its entertainment value. But this feminist monstrosity is beyond the pale.

It astounds me that in our already hyper-feminized-to-the-point-of-absurdity culture – which denigrates men at every turn and intentionally conflates true masculinity with toxic masculinity – that Hollywood still feels the need to so aggressively indoctrinate young girls and boys into this rancid woke nonsense.

We’ve become a vapid and vacuous nation of clowns, cuckolds and eunuchs, and Amazon Studios, Corden, Porter and the awful new ‘Cinderella’ are a sign of how far and how fast we’ve fallen.