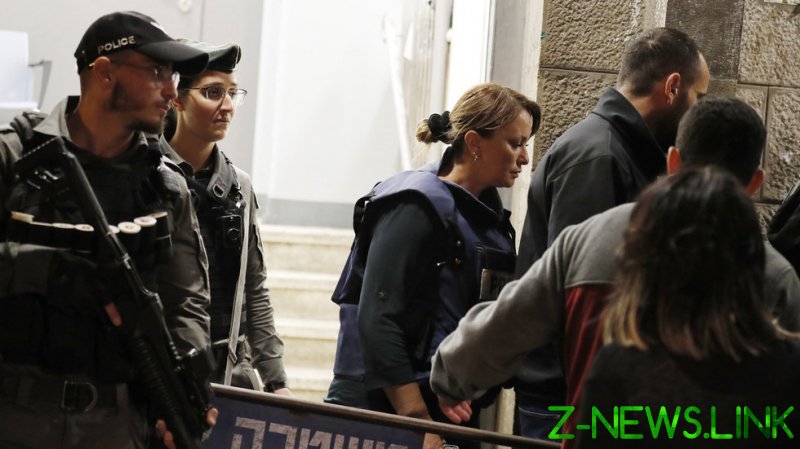 The arrest happened on Saturday in the Sheikh Jarrah neighborhood of the Israeli-occupied part of the city. Budeiri was reporting from a peaceful protest marking the anniversary of Israel’s takeover of Palestinian territories and the mass displacement of Arabs living there, which happened during and after the 1967 Six-Day War.

Footage of the incident filmed by Al Jazeera cameraman Nabil Mazzawi shows the reporter surrounded by Israeli officers, who push her near a wall and handcuff her. Budeiri can be heard repeatedly screaming: “Don’t touch” as she is being restrained.

The arrest was also captured from different angles by others present at the scene.

The camera used by the Al Jazeera crew was reportedly damaged during the altercation.

According to the Doha-based news network, there was no apparent reason for the arrest and the Israeli police acted with excessive force while taking Budeiri into custody. The police said they detained a woman and a man in Sheikh Jarrah after they refused to identify themselves and assaulted officers. Budeiri said she was accused of kicking a female soldier, which she denies.

Mostefa Souag, acting director general of the Doha-based channel, said the arrest fits a pattern of harassment of its journalists by the Israeli side.

“The silencing of journalists by terrorizing them has become a routine activity for the Israeli authorities, as witnessed in recent weeks in Gaza and occupied Jerusalem. These actions cannot be viewed in isolation,” he said.

Reports in Israeli media suggest the arrest followed a conflict between the journalist and police over her press credentials. Budeiri, who has been working for Al Jazeera since 2000, is accredited with the Israeli Government Press Office (GPO). According to Haaretz, she apparently didn’t have her press card on her and failed to produce it when asked by police. Al Jazeera insists Budeiri was carrying the proper papers and that the police prevented her from showing them. The journalist was wearing a flak jacket marked “press” when she was arrested.

Sheikh Jarrah is currently a closed neighborhood, with only people living there and members of the press allowed in. Last month, it became a focal point for mass protests over the forced eviction of Palestinian residents. A 1970 Israeli law allows Jewish families to claim property rights for houses in East Jerusalem, which were owned by Jews before 1948. Critics say it is used to push Palestinians out of East Jerusalem and enact a de facto ethnic cleansing.

The latest evictions in Sheikh Jarrah were one of the triggers for the 11-day escalation of violence between the Israel Defense Forces (IDF) and Palestinian militant groups controlling Gaza. Amid the hostilities, the IDF bombed a Gaza tower block that housed the offices of several international news outlets, including Al Jazeera. The Israelis justified the bombing by stating that Hamas stationed its military intelligence in the building.

Budeiri was released from Israeli custody hours after her arrest. She said she was banned from returning to Sheikh Jarrah for 15 days as a condition of being freed.