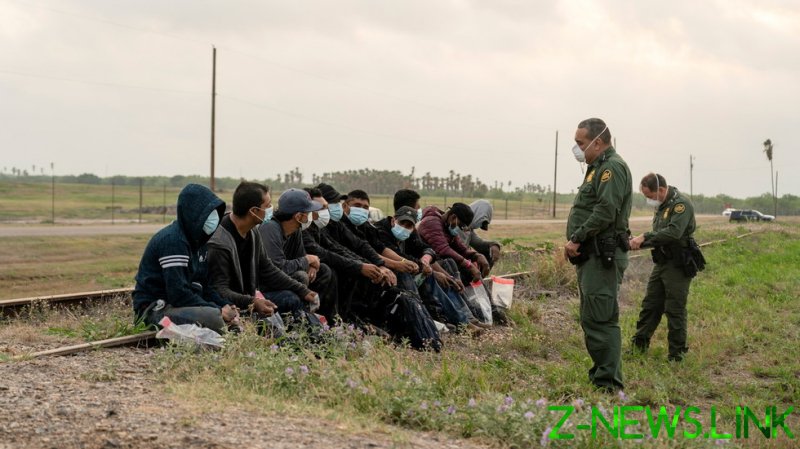 With Harris’ trip set for later this week, Abbott issued a statement on Wednesday preempting the visit, saying the White House’s “open border policies” are allowing Texas to be “overrun” by “gangs and smugglers.”

“The vice president was named Border Czar over 90 days ago, and in that time Texans have had their homes broken into, property damaged, and guns pointed at their heads as cartels, smugglers, and human traffickers profit off the Biden administration’s reckless open-border policies,” the Republican governor said, accusing Harris of “ignoring the real problem areas along our southern border.”

A spokesperson for the VP said she would head to El Paso, Texas on Friday. While that would mark her first visit to the border, the Harris staffer noted that she visited Guatemala and Mexico earlier this month to “address the root causes of migration” into the US, amid what Biden’s Homeland Security chief dubbed a 20-year high in immigration at the southern border.

The governor’s comments also come days before a planned border tour with former President Donald Trump on June 30. In accepting Abbott’s invitation last week, the ex-POTUS said Biden had turned the border into an “unmitigated disaster zone” and created the “single worst border crisis in US history.”

Abbott has also repeatedly slammed Biden’s immigration policies, which have aimed to reverse a number of restrictions imposed under the Trump administration. In March, the governor launched ‘Operation Lone Star’ alongside the Texas Department of Public Safety (DPS), saying it would combat a surge in human and drug trafficking into the state while blaming the president for the border “crisis.”

As of Wednesday, Abbott said the operation had made 1,700 criminal arrests, apprehended more than 41,000 illegal migrants and “seized enough fentanyl to kill over 21 million people,” referring to a powerful synthetic opioid frequently involved in drug overdoses.

Apart from Operation Lone Star, last week Abbott also declared that Texas will build its own border wall, attempting to make good on a key campaign promise from former President Donald Trump. While the previous administration was only able to complete around 450 miles of the wall, most of which replaced existing barriers along the 2,000-mile border, Abbott has vowed to see the project through, devoting $250 million in state funds as a “down payment.” Meanwhile, private fundraising has already brought in more than $450,000.

Abbott laid the groundwork for the Texas wall with a May 31 disaster declaration, which cited emergencies in dozens of counties along the border while noting that the “ongoing surge of individuals unlawfully crossing the Texas-Mexico border” poses an “imminent threat” to the state. While typically reserved for natural disasters, the declaration allowed Abbott to request state funds for the new border wall, ultimately securing $250 million for that purpose.