Home / WORLD / After Kyiv Post closure, will the West continue to give Ukraine’s Zelensky a free pass for his clampdown on media freedom?

After Kyiv Post closure, will the West continue to give Ukraine’s Zelensky a free pass for his clampdown on media freedom? 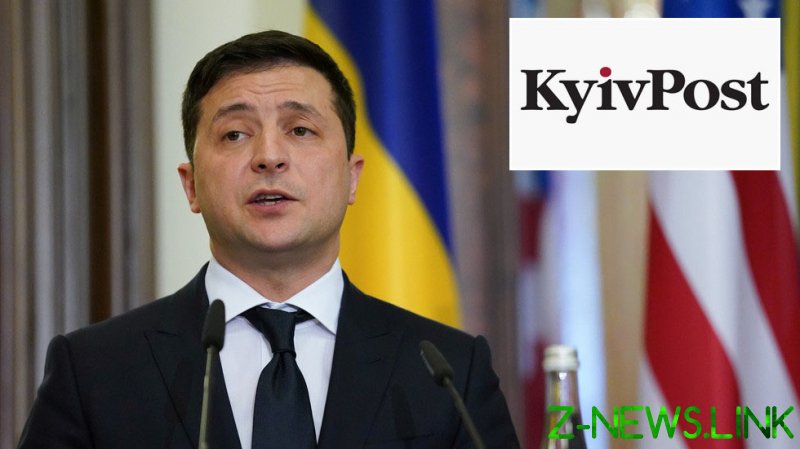 The outlet’s owner, real-estate tycoon Adnan Kivan, who runs the KADORR business group, did not stand on ceremony, simply informing the newsroom staff one morning that their jobs and their paper were over. Even if Kivan added a few token words of thanks for their services and made vague promises of, in essence, opening a different paper under the same name, his behavior was undoubtedly rough.

The Post’s reporters have since published a letter of protest, in which they accuse their former boss of planning to undercut the paper’s editorial independence. In their view, the decision to shut it down, rather than sell it, is retribution for their resistance against such plans. They claim that their news desk has been the “primary source of information about Ukraine for the international community” for over a quarter of a century, calling on foreign backers to support them now.

With all due respect to the Kyiv Post, if it has really been the primary source of information for foreigners on the country, that’s disturbing. It would say much more about those foreigners’ lack of linguistic skills and superficiality than about the paper’s real weight.

As if the blunt way in which Kivan exercised his legal right to tear down what he owns was not bad enough, there are also allegations that politics has played a role. The rumor is, according to the Ukrayinska Pravda newspaper, that Ukrainian President Volodymyr Zelensky did not like the Kyiv Post’s critical takes, for instance, when it came to his disdainful behavior toward the media.

Somehow, this not implausible guess goes, that fact influenced Kivan to toe the line. Especially now that Zelensky has rammed through a so-called de-oligarchization law that, in reality, allows him and his obedient party “Servant of the People” to brand wealthy individuals as oligarchs at will, sparing those they like. It makes sense that Kivan may just have moved out of the president’s firing line, perhaps even preemptively, without instructions or hints; just out of an abundance of caution.

Zelensky and his administration have denied any involvement. Yet, in the final analysis, that is not really the most important issue. More intriguing are two great ironies that are obvious yet mostly missed.

First of all, whatever influence Zelensky or his people exerted or did not exert, it is understandable that he has come under suspicion. Because the president has already shown a pattern of increasing authoritarian tendencies and, in particular, of clamping down on critical media.

Secondly, what has happened to the newsroom of the Kyiv Post is nasty and unfair. But it also is classical capitalism. In fact, in 2017, the successful New York publication The Gothamist, for which my wife worked, was unceremoniously shuttered in a very similar manner. An overbearing owner was intent on behaving like a baron ruling over his serfs – and, alas, under our beautiful capitalist order he had every legal right to do so. Insofar as the Kyiv Post has been a mouthpiece of liberal “free-marketization” for Ukraine, it got what it asked for. And it genuinely pains me to write that.

But there is a greater irony at play. President Zelensky has a well-established record of muzzling media outlets that he finds inconvenient. The most prominent and disturbing case is actually not the Kyiv Post but the online Russian-language publication Strana. In that case, Zelensky’s involvement is in no doubt. He utilized a perfectly non-transparent “national-security” procedure that mocks the rule of law. But since he covered his actions with mumblings about “Russia” this and “info-war” that, Western “useful idiots” of Zelensky’s rule either kept mum or even applauded his authoritarian sally. Luckily, Strana has fought back and is still online.

Western naivety has prevailed despite the fact that former president Petro Poroshenko – no stranger to cutting corners on democracy and law – recognized a similar spirit in his successor and publicly accused Zelensky of authoritarianism – as have many other Ukrainian observers who have absolutely no sympathy for Russia. Despite what Western info-warriors will insist, this isn’t ‘Russian disinformation,’ and anyone who can and wants to tune into Ukrainian talk shows can hear the same.

Zelensky has used similar hounding methods not only against media but political opponents as well, first of all Viktor Medvedchuk, a member of the Ukrainian parliament who leads the largest opposition party. As is par for the course in the country, Medvedchuk is also a very rich man with a thoroughly checkered past. Moreover, Medvedchuk openly stands for compromise with Russia.

But Zelensky’s use of pseudo-legal persecution is an abuse straight from the authoritarian handbook: brand your opponent as a “traitor” and shift the fight from the political to the legal sphere. If you think Medvedchuk must somehow deserve this treatment, there is a twist in the tale: Zelensky has also tried to use the same tactics against Petro Poroshenko, once the darling of the West.

Recently, Zelensky and Servant of the People went after the speaker of Ukraine’s parliament, Dmytro Razumkov – a party colleague of their own who would not obey the president quickly enough, putting parliamentary rules first – in what can only be described as an internal purge. Again, no biggie, it seems, for many Western “friends of Ukraine,” who would be better friends to ordinary Ukrainians if they were less friendly with its president.

The Kyiv Post itself has no record of solidarity with its colleagues targeted first – and more obviously – by Zelensky. Their cases were reported, but without comment or criticism. That is regrettable. It takes no cynicism, just an ordinary sense of fairness, to note that its newsroom’s current appeals for help would sound more convincing if its members had extended similar support to others, also across ideological divides. A missed opportunity and a pity, but too late.

The same is true for any observer who now wishes to speak up for the Kyiv Post: if only you had found your voice a little earlier, you’d look so much less biased and more credible now. Maybe next time you’ll think ahead? As a word to the wise, when you see a government going after media you don’t like, never assume it or its friends won’t ever go after those you do like.

Finally, there is yet a larger, final, international irony about this sad case: I, for one, take no one seriously – especially no media professional – who speaks about media freedom but is not on record as having publicly defended the single most important political prisoner at this moment. That is, of course, investigative journalist and transparency activist Julian Assange. No, there is no compromise, and this is not a “whataboutism.” If you are sitting on the fence re Assange, you have no credibility to participate in conversation on this topic. And in that case, you only have yourself to blame.