Home / WORLD / After Harry Potter game developer gets trashed for not being SJW enough, it’s clear: We need GAMERGATE 2.0

After Harry Potter game developer gets trashed for not being SJW enough, it’s clear: We need GAMERGATE 2.0 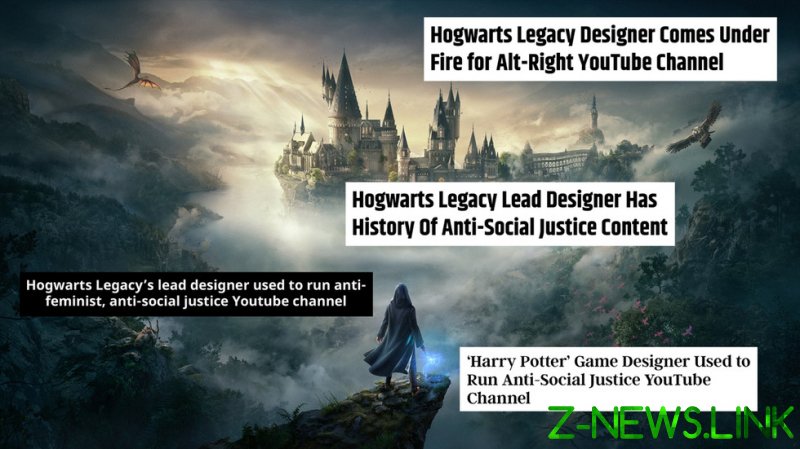 Exactly a year ago I published an article about a clique of journalists who are preventing individuals from attaining careers at any of the mainstream gaming outlets unless they are politically aligned with those doing the gatekeeping. Naturally this was scoffed at by the very people being called out, but if their actions this past year have proven anything, it’s that my reporting was completely accurate. Although now the situation is much more dire, as what can only be described as ideological vindictiveness has spread throughout the ranks and their goal is absolutely clear, destroy all who oppose them.

Consider this very moment where Troy Leavitt – the lead designer on the upcoming Harry Potter video game Hogwarts Legacy – is being trashed by the press due to the content of his Youtube channel. Running with essentially the same narrative, gaming websites are trying to cancel him for his “anti-social justice” views. But don’t let the copy/pasted headlines coming out of Kotaku, ScreenRant, and VG24/7 (among others) confuse you, the man hasn’t expressed homophobic, transphobic, or racist rhetoric, he merely disagreed with Anita Sarkeesian’s Tropes vs Women video series, criticizes modern feminism a bit, and he tears down the more woke side of the social justice movement.

Yet for as common as his beliefs are within the general public sphere, the press has decided to make an example out of him. They want him fired and unable to work within the industry, and via brute force they believe this can be done. On Twitter journalists are expressing a need for websites to refuse coverage to Hogwarts Legacy; meanwhile, gaming forum ResetEra – a place frequented by journalists – has put a ban on threads discussing the game, a move already being supported by the press. This all on top of the many articles attempting to discredit his name. The message being loud and clear, they want an industry that only represents their world views and they are doing their damnedest to force the game publisher’s hands on who they hire going forward.

It is ideological warfare, and it is time to combat it.

The state of things

It’s certainly a controversial statement to make, but gamergate needs a follow up. The media as it stands now is an enemy to free expression and thought. Journalists root for big tech censorship, write hit pieces on individuals who have done nothing wrong, publish editorialized ‘news’ as fact, slander innocent people, and they dedicate their time and energy to ruining the careers of others for no other reason than they disagree with their views. It is a sad state of affairs and they deserve all the pushback in the world, because for a conglomerate of people who have gotten far too comfortable in labeling cancel culture as “accountability” culture, I say it’s time to hold them to account.

Throughout the past year we have seen ideology take precedence more often than not, and it is resulting in some truly awful ‘journalism’. There’s the situation with Troy Leavitt already detailed above, a guy who chances are wouldn’t have been targeted had he not been working on a Harry Potter game, but similar to the circumstances surrounding Cyberpunk 2077 and its developer CD Projekt Red, the media has a bone to pick and it’s going to force out any controversy it can. For CP2077 it got so ridiculous that one writer even suggested the game would lead to trans people getting killed. Spoiler, this hasn’t yet happened. In regards to Hogwarts Legacy, the media has a hate-boner for author JK Rowling due to her perceived transphobic views, and so they are going full on-scorched earth.

Another notable incident involves a writer being fired for having the audacity to argue in favor of civilized debate. In a comment section on Rockpapershotgun Tim Stone expressed “profound respect” for trans people while also expressing that there’s a valid debate to be had about trans women competing in sports against biological women. Adding that it’s “totalitarian” to “silence and cancel people who don’t unquestionably support one side of the argument.”

Within a day journalists lashed out and called for his head, resulting in him being promptly dismissed from the site. And that is the work of the clique. Toe the line or else. There is no room for opinions that run counter to theirs. Which as the Hogwarts Legacy incident proves, this goes well and beyond the writers in their midst.

Depending on who you ask, Gamergate is many things. But the two common answers are either it was a consumer uprising opposing ethically compromised journalists or it was a harassment campaign aimed at marginalized individuals with the sole intent of pushing them out of the industry. Those being targeted as unethical came up with the latter answer, and that’s what is pushed by mainstream outlets.

The truth of course is quite a bit different.

It is nigh impossible to sum up the entirety of Gamergate in a few short paragraphs, but the general gist is that in 2014 gamers who for years had been fed up with the state of coverage surrounding the hobby finally vented their frustrations. The medium had gotten disgustingly unethical. For example, relationships weren’t properly disclosed when discussing or reviewing content made by friends, roommates, or in some instances, bed buddies. There were also underlying concerns about the symbiotic relationship between billion dollar publishers and the critics who were supposed to review their products. Most infamously Jeff Gerstmann was fired from GameSpot in 2008 after he gave a low score to a game he was reviewing. This the result of the publisher applying pressure to the website and threatening to hurt its bottom line by removing ad buys.

During Gamergate’s zenith, the industry was also being overtaken by more and more like-minded individuals and they were dictating coverage between websites in a behind-the-scenes chat network. Opinionated pieces began reflecting the same opinions, and for all the talk of diversity, there was less and less diversity of the mind. This being the most evident today as all the major gaming websites push the exact same views. It’s this point that causes the most anger.

I don’t think any reasonable person would agree that opposing opinions are inherently bad, but it does become a problem when only one set of opinions are ever highlighted within the mainstream, and as evidenced with the Hogwarts Legacy fiasco, one set of overly woke viewpoints overshadows everything, and this plays a huge role in the emotionally charged culture war we find ourselves in today.

And as with all wars, people choose sides, and with sides comes tribalism, and with tribalism comes a willingness to ignore your own side’s faults, and that was, and still is, Gamergate’s biggest flaw, because for as well-meaning as many who flew the GG banner may have been, there’s no denying that as a largely leaderless movement, it became far too easily hijacked by selfish and/or unethical actors, and many of their errors were swept under the rug by a far too forgiving audience.

A harsh mark against those who scream about “ethics in journalism.”

Consider still-thriving Youtubers who rose to fame during the movement and who lack any consistency whatsoever, constantly changing their opinions to appease an algorithm that rewards them with views and money. Some of these same Youtubers manipulate their audiences with various crowdfundings, raising hundreds of thousands of dollars only to not deliver a product as promised.

Alternative gaming websites who rose during the GG years fared no better. In 2019 it came to light that NicheGamer’s owner had been plagiarizing content for three years. If GG was about holding various entities accountable, it doesn’t speak highly that people still frequent the site. It should have died then and there as plagiarizing should be a death knell to any group that honestly cares about ethics. Yet founder, owner, and plagiarizer Brandon Orselli still profits from the place and writes for it.

The same goes for OneAngryGamer. A website so steeped in legitimate bigotry that some netizens believe its original owner was part of a grand conspiracy to belittle the Gamergate moniker. Delving further into racism and homophobia as a means of diminishing GG’s standing. That’s obviously laughable, but when one of the biggest Gamergate websites steers away from genuinely decent news coverage to full-on hatred of anything black-skinned or gay, well, that’s a problem and it should be criticized.

As a supporter of Gamergate myself, I know a lot of people won’t want to hear my criticisms of the movement, but the fact of the matter is that tribalism will get us nowhere. And if we truly want to enforce positive change within the industry and combat the narrative the mainstream media is too easily able to run with, there needs to be a new movement with defined goals. But most importantly it cannot be allowed to replicate the same mistakes, it must have standards across the board.

As it currently stands, mainstream journalists are far too comfortable ruining lives, pushing lies, and slandering others. They trashed Tim Soret for his milquetoast personal opinions and then celebrated when his game experienced developmental hardship. They tirelessly work to gatekeep and/or fire writers who express opinions that run counter to theirs. Right now they are labeling Troy Leavitt as ‘alt-right’ even though he so clearly is not. They protect their own friend who legitimately lied about transphobic abuse at the hands of a comedian on stage. They don’t hold their buddy Zoe Quinn to account even though she scammed people out of $85k. They dig through tweets to create controversies even when some of their closest allies have a history of throwing slurs. They chase after developers and try to ruin their careers for the most minor of slights, referring to them as bigots over huge misunderstandings. They cancel people for jokes even though their allies have made ones in poor taste too. They maintain no accountability within their own ranks. And the list goes on and on.

As stated already, they are enemies to free expression and thought and they deserve to be held accountable. As the expression so eloquently goes, you get what you f**king deserve.