Home / WORLD / After Geneva summit, Biden shows his preference for fantasy narratives extends beyond the US to Russia as well

After Geneva summit, Biden shows his preference for fantasy narratives extends beyond the US to Russia as well 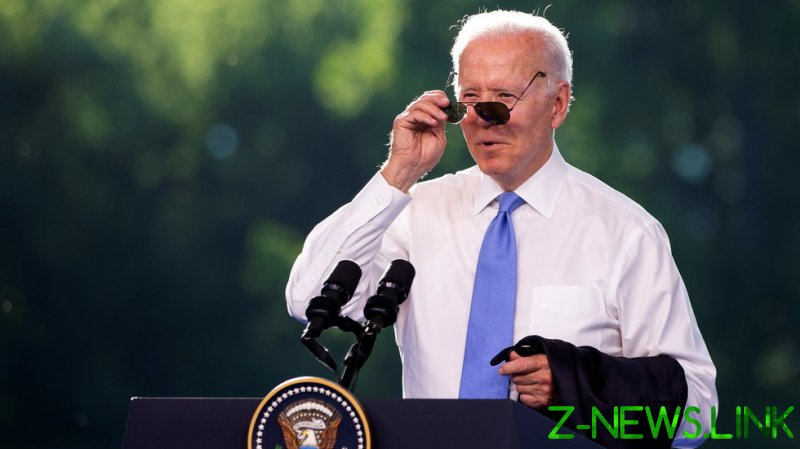 Parsing Biden’s words is a thankless task, because whatever he actually says, his White House handlers and the compliant media will quickly ‘clarify’ if it clashes with their narrative. With that caveat in mind, some of his remarks at Wednesday’s solo press conference in Geneva, following the meeting with Russian President Vladimir Putin, could be considered revealing.

“As usual, folks, they gave me a list of the people I’m going to call on,” Biden admitted at the start, “they” being the White House staff, presumably.

Whereas Putin sparred with reporters for nearly an hour, and took questions from US outlets, Biden lasted only about half as long and the only Russian he called on worked for the US government outlet Current Time. He also revealed that he watched Putin’s presser at least in part, indirectly confirming that scheduling was not why he declined a customary joint appearance.

Biden’s preference for media-manufactured narratives – even when they clash with observable, proven facts – has been pretty conclusively established by now. He actually repeated one of them on Wednesday, claiming – falsely – that “literal criminals” at the US Capitol “killed” a police officer. The ‘Capitol insurrection’ narrative is what the ruling Democrats are currently leveraging to turn the power of the US security state against their political opponents.

Another narrative he invoked was of “America as an idea,” along with the bit recycled from March when he said that any US leader must discuss human rights because those are American values and “who we are.”

He was referring to talks with Chinese President Xi Jinping then, and Putin now, in the context of “personal relationships” being the most important thing in foreign policy. However, when his predecessor attempted personal diplomacy with Russia, China and North Korea, the media-Democrat establishment in Washington shrieked in horrified outrage. Clearly, to them it matters less what is done than who is doing it, and to whom.

There was a particularly surreal moment on Wednesday, when Biden tried to argue that Putin is driven by desire to gain approval and standing in the eyes of the “world,” presumably referring to the US and its allies (or vassals). Reporters may not think it matters, Biden said, but he was “confident that it matters to him,” meaning Putin.

“How would it be if the United States were viewed by the rest of the world as interfering with the elections directly of other countries and everybody knew it? What would it be like if we engaged in activities that he engaged in? It diminishes the standing of a country,” he asked rhetorically.

Many people justifiably saw this as totally lacking in self-awareness. What does he mean, “if”? The US has literally been interfering in elections and toppling governments for decades, through military coups and color revolutions, some of which – such as Serbia and Ukraine, twice! – Biden was involved in himself.

Yet few noticed Biden’s curious phrasing: it’s not about whether the US is actually doing these things or not, but whether it was “regarded around the world” as such. In other words, narratives over facts.

Which brings us to Biden’s understanding of Russia and Putin. He told reporters he read “most everything” that Putin has written and speeches he’s made, as well as “a couple of very good biographies.”

That last part is key – the English-language biographies of Putin are almost universally penned by professional “Russia-watchers” in think-tank-land. These are the same people who’ve been predicting Russia’s impending collapse for 20-plus years now and tend to conjure nonexistent “doctrines” into being. They should be taken with an asteroid-sized chunk of salt, not at face value as Biden seems to be doing.

Whatever he may have said to Putin, Biden sent a very clear message to Russians during his press conference. In the early 1990s, he said, “Russia had an opportunity, that brief shining moment… to actually generate a democratic government” and “it failed.” Instead, Biden argued, Putin united Russia around government power, which has not helped its prosperity, power or standing in the world.

Needless to say, actual Russians have a different recollection of that “shining moment” as one of rampant crime, oligarchy, pillaging, poverty, and humiliation at the hands of US ‘advisers’ propping up President Boris Yeltsin’s government – to the point of helping him, shall we say, “fortify” the 1996 election.

“It’s hard to imagine having more direct control over a foreign country’s political system — short of a straight-up military occupation,” as Russian expat journalist Yasha Levine argued in his description of the 1990s.

Another typical tactic of propaganda narratives is to accuse the other of things that are true of oneself. When Biden argued that Russia’s alleged behavior “diminishes the standing of the country that’s desperately trying to maintain standing as a world power” and that Moscow is “not able to dictate what happens in the world,” it was hard not to hear confession through projection.

Biden is so invested in the narrative he inhabits, he gets testy when anyone challenges it – from voters in Iowa and Michigan to members of the, frankly, obsequious White House press corps. Last month, when questioned about Israel during an electric car photo-op, he “joked” about running over a female reporter. On Wednesday, he unloaded on another female reporter, Kaitlan Collins of CNN, after she questioned his belief about Putin’s motivations.

To borrow his own expression, the proof of the pudding is in the eating.