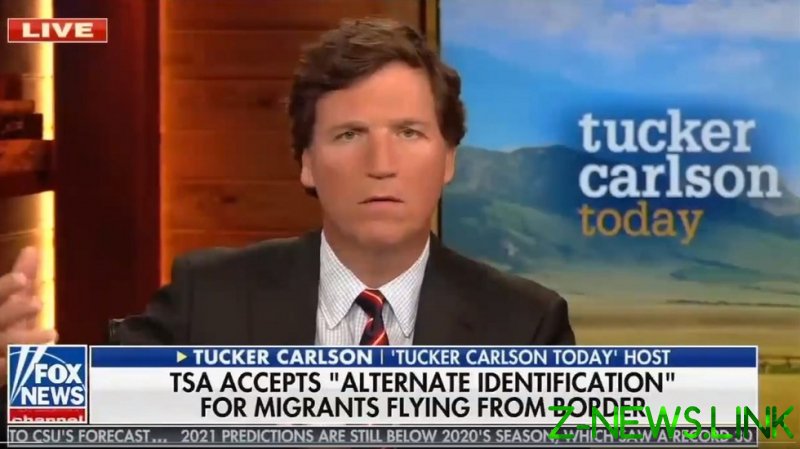 “Tucker must go,” Greenblatt tweeted on Friday above a video clip of Carlson’s guest appearance on Mark Steyn’s primetime show the evening before. The clip was posted by Media Matters for America (MMFA) researcher Nikki McCann Ramirez, who said Carlson gave a “passionate defense” of “white replacement theory.”

The outraged ADL CEO called it a “white supremacist tenet that the white race is in danger by a rising tide of non-whites” that is “antisemitic, racist and toxic.”

Had he actually watched the nearly two-minute segment, Greenblatt might have heard Carlson literally deny that his position had anything to do with the notion.

“Everyone wants to make a racial issue out of it: Oooh, the ‘white replacement theory’ – No, no no. This is a voting rights question,” Carlson told Steyn.

He even prefaced the comment by saying that “the left and all the little gatekeepers on Twitter become literally hysterical” if anyone uses the term “replacement” to describe what he said was the Democrats importing immigrants to “dilute” the votes of existing Americans – of all colors and creeds, he implied.

Instead, Greenblatt doubled down and said he wrote to Fox News CEO about Carlson’s “long pattern of increasingly toxic rhetoric in recent years.”

MMFA is run by the notorious Democrat operative David Brock, and even its heavily sanitized Wikipedia page acknowledges that it has waged a ‘War on Fox News’ for more than a decade.

Last month, CNN declared Carlson “the new Donald Trump” – seeking to cast the Fox News host as the mainstream media’s new object of hate after the 45th US president was banished from the public sphere.

Just a few days prior, the Pentagon mobilized its PR machine to go after Carlson, after his criticism of policies geared towards women in combat touched a nerve. An article on the official DOD website declared, ‘Press Secretary Smites Fox Host That Dissed Diversity’ and officers from all branches of the military posted videos denouncing Carlson.

Both MMFA and pressure group Sleeping Giants have gone after Carlson’s sponsors, trying to get him taken off the air, but to no avail. Fox News recently expanded his presence on the network from the daily hour-long primetime show to a thrice-weekly interview show and an online exclusive series.

While all cable networks took a ratings hit after the 2020 presidential election, Carlson’s show has since rebounded, and the host became even more popular among conservatives after grilling Republican governors of South Dakota and Arkansas over their recent veto choices.

‘Tucker Carlson Tonight’ averaged 2.9 million viewers last week, and was the most-watched cable news program of the week, according to the latest Nielsen Research numbers. This helped Fox “dominate” other basic cable networks by a wide margin – with 2.2 million average primetime viewers compared to the 1.6 million of runner-up MSNBC.

CNN was bringing up the rear with a mere million average viewers, in sixth place behind the sports channel ESPN and Home and Garden TV.