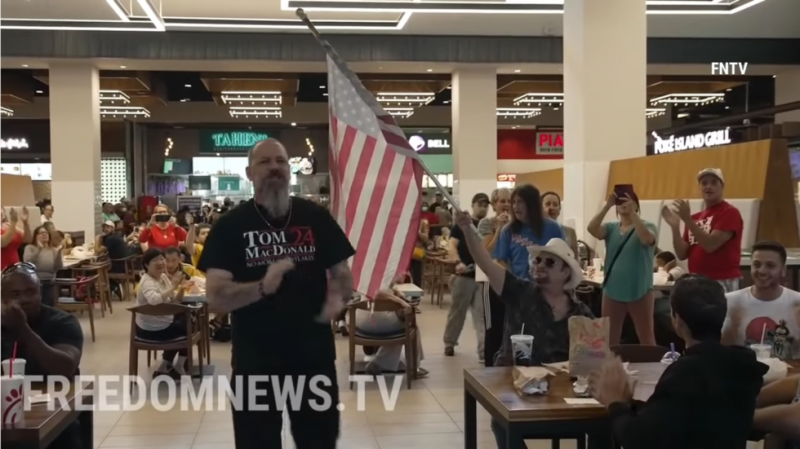 A crowd of some 60 people took over the Food District area at the Staten Island Mall on Saturday in a protest against New York City’s city-wide vaccine mandate. A video shared by FreedomNewsTV shows activists flooding the food court without any resistance from either the security or staff despite a sign at the entrance warning diners that they must be vaccinated to enter the court. The protesters then proceed to take seats, occasionally breaking into chants of “USA!” and “f*ck Joe Biden”.

FreedomNewsTV reported that the activists “ate for over 30 minutes” unimpeded before leaving. At one point, the demonstrators chanted “My body – my choice,” and recited the pledge of allegiance. Court employees and other visitors appeared not to mind the display.

At least one demonstrator in the video could be seen donning a QAnon-themed T-shirt, while another activist sported a ‘Trump won’ shirt.

The scene was in a stark contrast with the one that played out outside an Italian restaurant on NYC’s Upper West Side on Monday night, where three Texas women were arrested for assaulting a hostess who attempted to enforce the vaccine pass rules.

Since mid-August, New Yorkers have to show proof that they received at least one dose of a Covid-19 vaccine to dine indoors. Residents can either bring a vaccine card with them or show its digital copy. By introducing the policy, NYC became the first major city in the US to make proof of vaccination a must for people who want to participate in most indoor activities under its “Key to NYC” program.

The restrictions have drawn sharp criticism from conservatives, but also from workers’ unions, arguing that the rules are discriminatory. In a win for the opponents of the mandates, a federal appeals court on Saturday blocked a Covid-19 vaccine mandate for the city school employees, pending a decision by a three-judge panel on its legality. Unperturbed by the setback, city officials said that they expect the mandate, which requires school workers to have at least one dose of a coronavirus vaccine by Monday, to be upheld and will enforce it anyway.