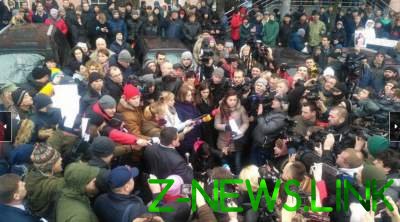 Dmitry coens told the participants about the investigation.

On Tuesday, around 12:00 in the center of Kiev, near the regional Department of the National police began the rally with a demand to investigate the death of a lawyer called Irina Mostovskoy. Police building has gathered about 200 people.

The protesters left the chief of a Central Board Dmitry coens. He said that police have conducted about 50 interviews, examines the security footage.

“Yes, unfortunately, yesterday we found the body of Irene. To date, after examination of the scene the body was sent to forensic medical examination to establish the nature of injuries, cause of death of the victim and a series of operational measures. We had worked more than 20 cameras that face the movement path of Irene from work to home. In addition, today formed a powerful group, operational unit fully alarmed. Now in the territory where we found the body, carried out an additional inspection, additional measures to obtain information”, – said the policeman.

During performances of participants of meeting one of the protesters hit price, started the brawl. The situation soon calmed down, the police remained in place and continued to chat.