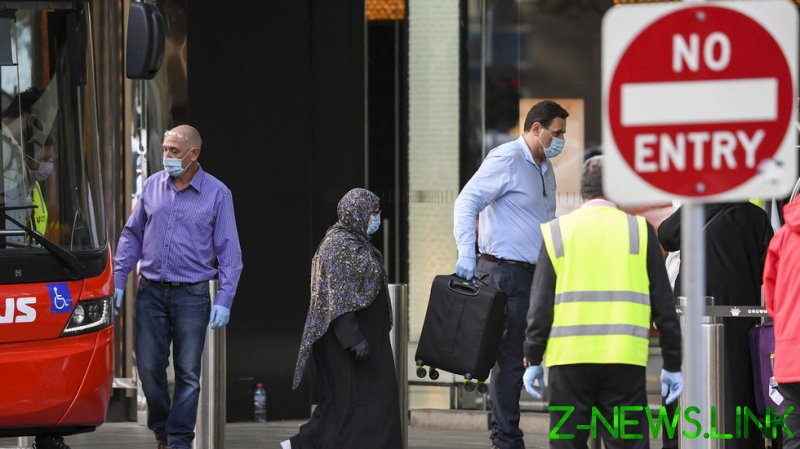 The measure was introduced by the Australian government for its residents and citizens on Friday. Starting from May 3, no one will be allowed to arrive into the country from India, otherwise facing civil fines, imprisonment, or both. It’s the first time returning home for citizens might be regarded as a criminal offense. A flight ban from India was also extended on Friday, to include not only direct flights but also transit routes.

“This is an outrageous response. Australians have a right of return to their own country,” director of Human Rights Watch in Australia, Elaine Pearson, said in a statement. She added that additional quarantine measures should have been introduced, “instead of focusing [government] efforts on prison sentences and harsh punishments.”

Announcing the new strict measures, Health Minister Greg Hunt said they were aimed at protecting public health and reducing Covid-19 cases in quarantine facilities “to a manageable level.” “The proportion of overseas travelers in quarantine in Australia who have acquired a Covid-19 infection in India” was the factor that triggered the sanctions, he suggested. “The friends and family of [Indian-Australian community] in Australia are at extreme risk. Tragically, many are contracting Covid-19 and many, sadly, are dying every day,” he said in a statement, adding that to help those in India Australia will send emergency medical supplies there. Restrictions are temporary and will be reconsidered on May 15, officials said, while admitting the move is “drastic.”

Experts argued the response was inconsistent with previous anti-Covid policies, as there have been no such strict bans involving other affected countries. “It is incredibly disproportionate to the threat that is posed,” Melbourne doctor and health commentator Vyom Sharma told local media. Pointing out that people from the US “in much higher quantities” have been freely entering Australia and testing Covid positive, he wondered: “Why is it that India has copped this ban and not people who have come from America?”

Some went as far as to dub the decision “racist.” “Indian-Australians are seeing this as a racist policy because we are being treated different than people from other countries who have had similar waves of infection like the US, the UK and Europe,” an Australian surgeon with family in India, Neela Janakiramanan, said, as quoted by Reuters. “It is very hard to feel anything other than targeted as an ethnic group.”

“To ensure there is no misconception the ban is in any way racist,” the government should have instead tried to find a way to get its citizens back from India rather than abandoning them, a World Health Organization advisor Mary-Louise McLaws suggested.

More than 9,000 Australians have been stranded in India, according to official data, and some 650 of those people are registered as “vulnerable.” According to those opposing the recent ban, these Australians should have been aided to come back home and be properly medically treated. “I think what we should be doing is trying to make it easier for people to get home,” opposition MP Jason Clare told local media.

A surge in new coronavirus cases and deaths in India has been making headlines recently, with the Asian country breaking global Covid records daily. A new single-day record was set on Saturday, with nearly 402,000 cases registered. In total, more than 19.1 million people have been infected in the country since the start of the pandemic, and more than 212,000 died. It is feared the situation will only worsen in the coming days.