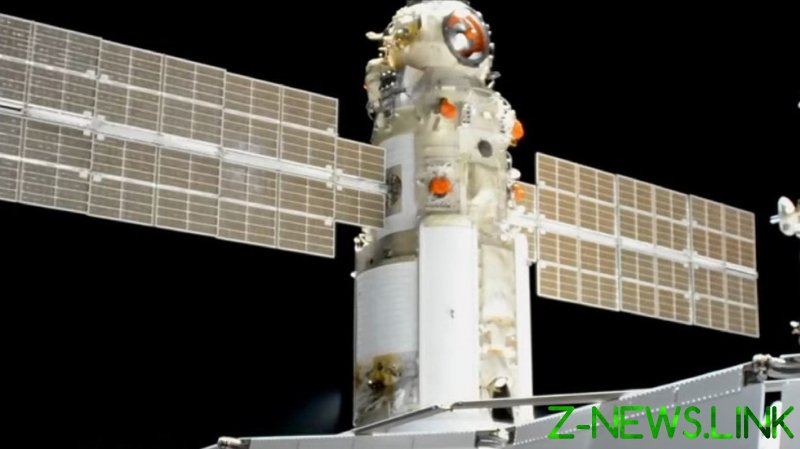 Roscosmos announced the docking of ‘Nauka’ on Thursday, the first new Russian component of the ISS in over a decade, which replaced the 20-year-old ‘Pirs.’

Around 16:45 GMT, however, the module’s thrusters began to fire, pushing the ISS about 45 degrees out of its normal rotation.

As the station began to spin, ground control told the crew to close the windows and fire thrusters on the ‘Zvezda’ service module as a counter. The Progress 78 robotic supply ship, which is currently docked with the station, also helped the process.

The move ended up “effectively countering” the errant thrusters, according to chatter from ground control picked up by reporters.

While some space experts have compared the effort to get Nauka’s thrusters under control to disarming a live hand grenade, the Russian cosmonauts on board the ISS were able to access the multipurpose lab module and configure its propulsion systems “to prevent any recurrence of those inadvertent thruster firings,” NASA said.

“It is not known what caused” the thrusters to fire, NASA said. The US space agency announced around 18:21 GMT that all ISS systems are operating normally and the crew was “never in any danger.”

The ISS crew have scrubbed their schedules for today in order to focus on recovery efforts, NASA added, but the station is “in good shape” and has full orientation and attitude control back.

The ISS currently has seven crew members on board, who were preparing to wind down their operations for the day when the misfiring incident happened. The 13-meter-long module has reportedly experienced problems with main propulsion while approaching the station, making the docking procedure unusually difficult.

Thursday’s mishap did have one other consequence. NASA has decided to postpone the planned launch of the Orbital Flight Test-2 mission that was scheduled for Friday, and are “assessing the next available opportunity,” the agency said. Boeing’s Starliner spaceship will have to wait until the ISS finishes the checkouts on Nauka and is ready for its arrival.