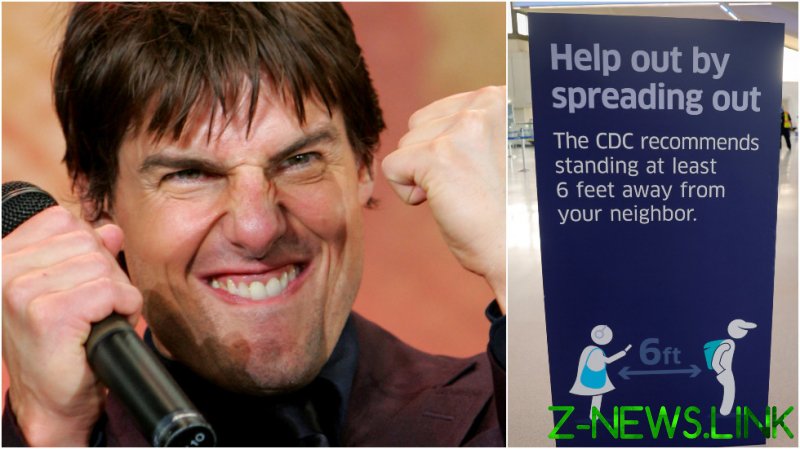 “If I see you do it again you’re f***ing gone!” an enraged Cruise barked at two workers after seeing them standing too close to each other on set, according to audio obtained by the Sun on Tuesday. “That’s it! No apologies. You can tell it to the people that are losing their f***ing homes because our industry is shut down.”

One contingent of commenters couldn’t help but tie Cruise’s heated upbraiding to politics, with critics of President Donald Trump suggesting the actor should open up “every MAGA rally” with a similar polemic.

The ‘yelling-to-keep-you-safe’ theory was not accepted universally, however, as some netizens questioned why they ought to praise Cruise’s angry “outburst” at lowly crew members with far more precarious job security than the multi-millionaire actor.

“‘Rich man yells at working class people’ isn’t great, even if Cruise is right in wanting the crew to be more Covid friendly,” one commenter said.

Other critics recalled that Cruise has previously shown little concern for ‘stopping the spread,’ encouraging his social media followers to get “back to the movies” in August while filming himself at a London screening of Christopher Nolan’s sci-fi thriller ‘Tenet.’

Freelance journalist Yashar Ali, meanwhile, countered those applauding Cruise, arguing he is an “enabler” of the Church of Scientology, which he called a “criminal organization that has destroyed people’s lives.” The actor has been involved with the group since the 1990s, garnering viral attention in 2008 after an internal church video was leaked online, with Cruise seen heaping exaggerated praise on the organization and its members.