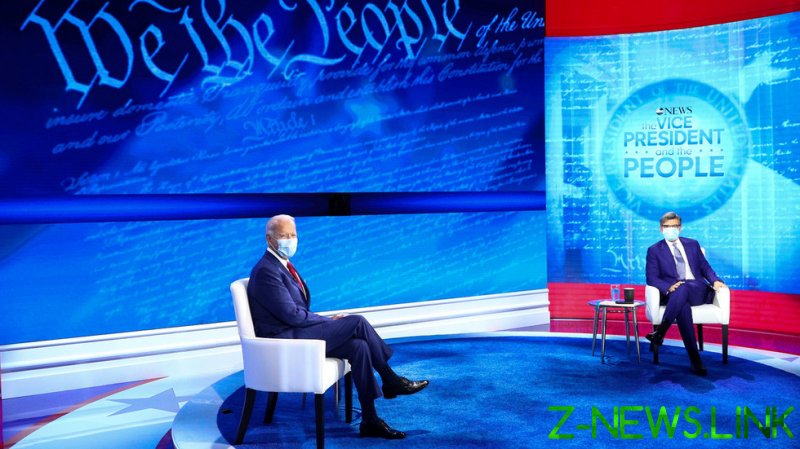 Host George Stephanopoulos steered clear of the Post’s scoops, including a story on Wednesday that suggested Hunter Biden peddled political influence, including providing a Ukrainian business associate access to then-vice president Joe Biden in 2015. The Post followed up on Thursday with an article claiming the younger Biden stood to make millions of dollars working for a Chinese energy firm, including $10 million annually “based on introductions alone.”

The Ukraine story, in particular, contradicted Joe Biden’s previous statement that he never spoke to his son about his overseas business dealings. Biden’s campaign denied that a meeting with the Ukrainian executive took place, saying it wasn’t on the former vice president’s “official schedules,” but it didn’t refute the veracity of the emails underpinning the report.

Biden himself might have been pressed on the issue with his town hall coming up just one day after the Ukraine article surfaced, but neither Stephanopoulos nor the audience members whom ABC allowed to ask questions broached the topic. The silence followed a trend of social-media companies and mainstream media outlets suppressing the Hunter Biden reports.

Twitter not only blocked its users from linking to the news or sending it in a direct message, it even locked the accounts of the Post and people who shared the Ukraine story, such as actor James Woods and White House Press Secretary Kayleigh McEnany. On Thursday, Twitter went so far as to censor a government website. Republicans on the US House Judiciary Committee tried to work around the ban on sharing the article by posting it on their official government website and telling followers to click on their link and spread it. But when Twitter users tried to click on the link, they were met with a warning that it “may be unsafe.”

Major media outlets ignored the Post stories, and mainstream journalists cheered the moves by Twitter and Facebook, so ABC’s handling of the issue was unsurprising to those who had decried the censorship. Journalist Curtis Houck called the town hall “another example of censorship and collusion.”

Other observers saw the ignoring of the Hunter Biden issue as part of ABC’s overall kid-gloves treatment of Biden and contrasted it with the town hall that NBC hosted with President Donald Trump. “They spoke to him (Biden) like a toddler; meanwhile, Trump was attacked,” one commenter said. Another Twitter user said, “There could be a side-by-side comparison on the moderators (ABC, NBC) to really hear and see the difference of each of their tones and body language. Could be funny.”

While some observers tuned into the Biden town hall in hopes of hearing him confronted on the Post reports, others dismissed the topic. Online entertainment producer Suzanne Lindbergh called it “Russian disinfo.” Others argued that the question wasn’t relevant because Hunter Biden isn’t running for president, or that questions about Trump’s children would have been more justified.