Home / Video news / A student opened fire from a balcony in the center of Kharkov. Video

A student opened fire from a balcony in the center of Kharkov. Video 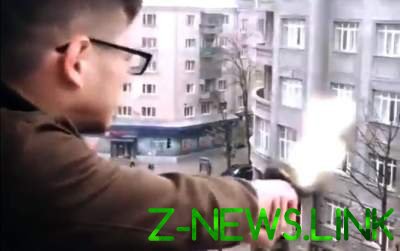 In the Internet appeared the video with the shooting in Kharkiv, which gave from the balcony of a house in the city centre, the unknown guy.

Released footage shows how a young man makes several shots, and then laughing, goes back to the room.

At the same time, judging by the votes behind the scenes, in the apartment he was with the company.

According to the Facebook user Roman Pelekh, which spread the video via your page, this video belong to the man under the nickname tvorok.druzhbi, who published it on his Instagram.