A member of the “Cossacks DNR” tried to bribe border guards 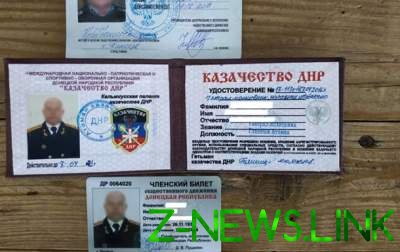 The man offered a bribe to the border guards in the amount of one thousand hryvnia, but was refused and was arrested.

Employees of state frontier service and fiscal service in a checkpoint in Marinka detained the man with the “documents” self-proclaimed DNR, which offered a bribe for non-disclosure of the fact of detection.

It is reported by the state border service on Monday, July 23.

See also:  In the occupied Donetsk tried to detain the wife of one of leaders of terrorists. Video

It is noted that during the inspection of a Toyota Corolla was found a cache, where the “documents” with symbols of the DNI issued to the resident of Donetsk: “certificate”, “international national-Patriotic and sports and defense organization DNR”, “DNR Cossacks”, “the mark of quality” “the people’s supervisor of the public movement “Donetsk Republic” and “membership card” of the public movement “Donetsk Republic”.

See also:  In Kiev, the burglar tried to hide by wearing a bag on your head. Video

“Subsequently, law enforcement authorities established that a citizen is a member of the “Cossacks” since 2003 and holds the rank of the so-called “General-ataman”, – stated in the message.

The man offered a bribe to the border guards in the amount of one thousand hryvnia, but was refused, was arrested and handed over to the police.