Home / WORLD / ‘A knife in the heart of Holocaust survivors’: Australian police seize Nazi flag near synagogue ahead of Kristallnacht anniversary

‘A knife in the heart of Holocaust survivors’: Australian police seize Nazi flag near synagogue ahead of Kristallnacht anniversary 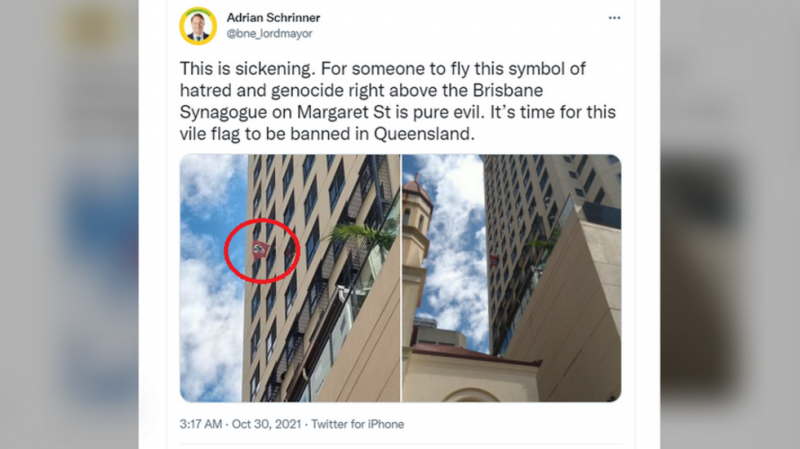 The Nazi flag was flown from a window of the neighboring UniLodge student housing complex downtown. The vice president of the Queensland Jewish Board Deputies, Jason Steinberg, told AAP that synagogue-goers noticed the swastika on Saturday morning.

The flag was removed after police arrived at the scene, and a 45-year-old local man was charged with a public nuisance offense.

Steinberg said it was “shocking” to see a Nazi symbol displayed in public just days from November 9, when Jews remember the victims of Kristallnacht, the night a wave of state-sanctioned pogroms began in Germany and Austria in 1938. “That flag is a symbol of pure hate,” Steinberg said.

Dvir Abramovich, the chairman of the Anti-Defamation Commission, said the incident was akin to “plunging a knife in the heart of Holocaust survivors.”

Brisbane Lord Mayor Adrian Schrinner called for the “vile flag” to be banned in the state of Queensland. “Under the current inadequate laws, this is likely to be classified as nothing more than a low-level ‘public nuisance’. Not good enough!” he tweeted.

Last month, Victoria became the first Australian state to announce that it would ban the public display of the swastika in response to the rise in Nazi activity. Calls to crack down on Nazi symbols intensified in the state last year after a flag featuring the swastika was spotted flying over a home in a rural area.