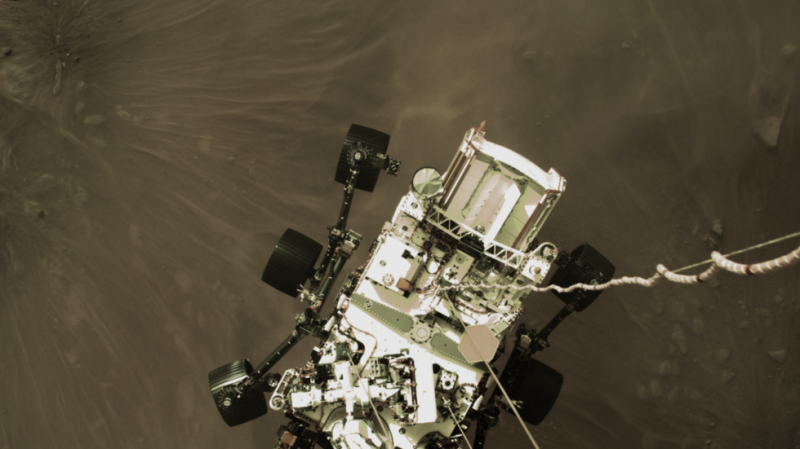 The rover touched safely down on February 18 after a 300-million-mile voyage from Earth to start its mission to search for signs of ancient microbial life on Mars. The clip released on Monday covers the final few minutes of that incredible journey, as NASA engineers tracked the descent of Perseverance.

“Now we finally have a front-row view to what we call ‘the seven minutes of terror’ while landing on Mars,” said Michael Watkins, director of NASA’s Jet Propulsion Laboratory in Southern California, which manages the mission.

Cameras on board began filming the rover once it entered the Martian upper atmosphere, just moments before its parachute – a 70.5-foot-wide (21.5-meter-wide) canopy – deployed to slow its descent to around 200 miles per hour (320 kilometers per hour).

The footage then shows Perseverance swaying over the surface of Mars as the Red Planet looms towards the camera, before its rocket engines fire to further slow the descent and drop the rover from its protective shell onto the surface. The rover’s touchdown is met with whoops of delight from the NASA team.

“I’ve been waiting 25 years for the opportunity to see a spacecraft land on Mars,” said Matt Wallace, Mars 2020 Perseverance deputy project manager at JPL. “It was worth the wait.”

The project’s main focus is astrobiology and scientists plan to use Perseverance to collect various geological samples which can be returned to Earth for detailed analysis via future joint operations with the European Space Agency (ESA).

Perseverance is one of three missions to successfully reach Mars this month, after the UAE’s Hope orbiter and China’s Tianwen-1.