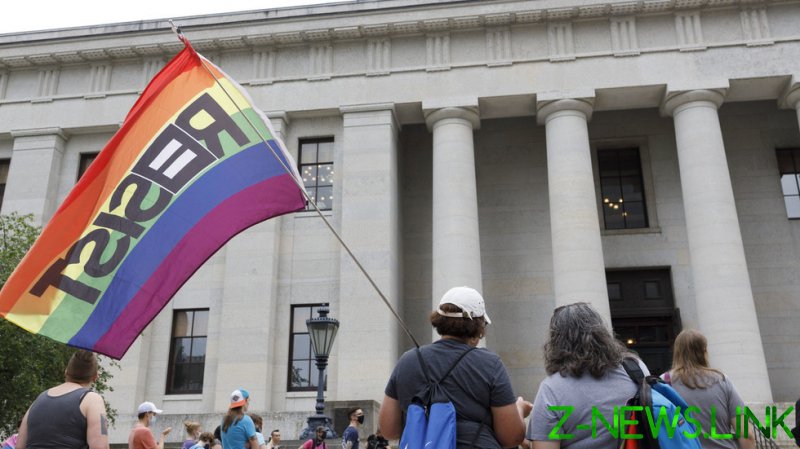 The lawsuit was filed on Tuesday by attorneys general from 20 Republican-run states, led by Tennessee Attorney General Herbert Slattery. The suit claims that an executive order issued by Biden in January, along with two directives issued by the Equal Employment Opportunity Commission (EEOC) and the Department of Education, amounted to an unlawful attempt to bypass Congress and change federal law.

Biden’s executive order tasked every federal agency with reviewing their policies to “prevent and combat discrimination on the basis of gender identity or sexual orientation.” Following the order, the EEOC and Department of Education issued their own guidance, which in the  department’s case required schools and colleges to allow transgender women onto women’s sports teams.

Should a federally-funded school refuse to adhere to this, or refuse to allow a transgender student to use whatever bathroom they wish, the department’s guidance states that it can launch an investigation.

Biden’s order and the two memos that followed were based on an interpretation of Bostock v. Clayton County, a case that came before the Supreme Court last year. In a 6-3 verdict, the court ruled that employers cannot terminate employees “simply for being homosexual or transgender,” finding that the 1964 Civil Rights Act’s protections against “sex” discrimination also applied to “sexual orientation” and gender identity.

In the court’s ruling, Justice Neil Gorsuch wrote that “we do not purport to address bathrooms, locker rooms, or anything else of the kind.” Yet dissenting Justices Samuel Alito and Clarence Thomas predicted that the ruling would be used for just that, and the Biden administration has since proven them correct.

Dissent also came from Justice Brett Kavanaugh, who argued that retroactively reinterpreting the Civil Rights Act was not the job of the Supreme Court. “We are judges,” he wrote, “not Members of Congress. Our role is not to make or amend the law.”

Slattery echoed these words on Tuesday when speaking of the lawsuit. “This case is about two federal agencies changing law, which is Congress’ exclusive prerogative,” he said in a statement. “The agencies simply do not have that authority. But that has not stopped them from trying.”

The Democratic Party has thus far failed to pass the Equality Act, an ambitious piece of legislation that would actually write such protections for transgender people into the law. With the Senate split 50-50 between both parties, the act is unlikely to pass any time soon. In the meantime, any attempts to do so in piecemeal fashion, as in the case of the EEOC and Department of Education, will face Republican resistance and likely be decided by the courts.