20 arrested at protest against lockdowns & ‘LGBTQ+ propaganda’ in Lithuania (VIDEO) 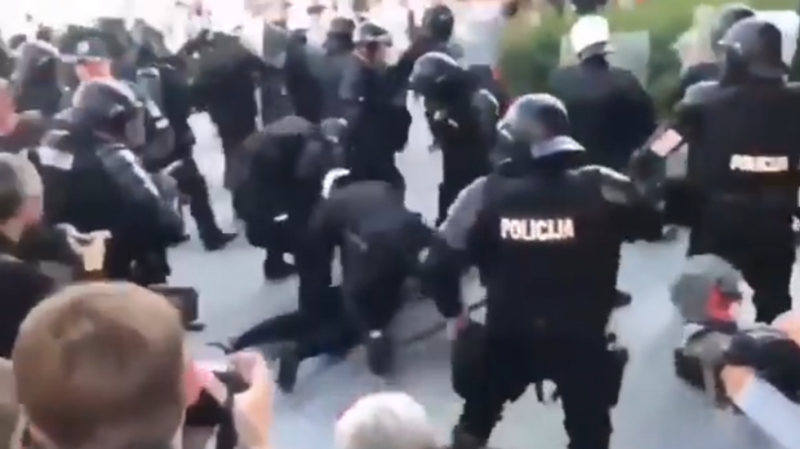 Around 5,000 people flocked to the center of the Lithunian capital, Vilnius, on Friday for an event organized by the traditionalist Lithuanian Family Movement. The protesters, who gathered at the Cathedral Square north of the city’s Old Town, were seen waving Lithuania’s national flags and holding placards that read: “George Soros out of Lithuania!” and “No to animal passports” – a reference to the introduction of immunity passports and other Covid-19 restrictions that are to come into force on Monday.

The protesters demanded the government scrap the policy, which will bar access to some shops, services and indoor public events for those without immunity certificates. The document is provided to those who are fully vaccinated, have recently recovered from Covid-19 or anybody who has tested negative for the virus within the last 48 hours.

The protest proceeded incident-free almost until the end, when a group of demonstrators set off towards Lithuania’s Parliament, the Seimas, defying police orders and the Family Movement’s leader, Raimondas Grinevicius, who urged supporters to stay on the square and avoid provocations before the rally.

From about two dozen people that were detained, the majority were nabbed for disobeying police orders, including for walking on the roadway, police said. Two people were arrested as part of an investigation into earlier clashes outside the parliament, while one was detained for illegal possession of drugs.

No one was injured during the brief standoff and no property was damaged, the police claimed.

In addition to airing their grievances over the government’s handling of the pandemic, the gathered also opposed a bill to legalize same-sex civil partnerships and a proposal to ratify the Istanbul Convention – a human rights treaty aimed at combating violence against women and domestic violance in general – which was adopted by the Council of Europe in 2011.

The treaty is perceived by several nations, including Bulgaria, Slovakia and Poland, as championing the LGBTQ+ cause and harming traditional family values. Lithuania signed the convention in 2013 but has never ratified it.

A pre-recorded video greeting from representatives of Fidesz, the party of the Hungarian Prime Minister Viktor Orban, was played during the rally, which was also attended by members of Germany’s right-wing Alternative for Germany (AfD) party.