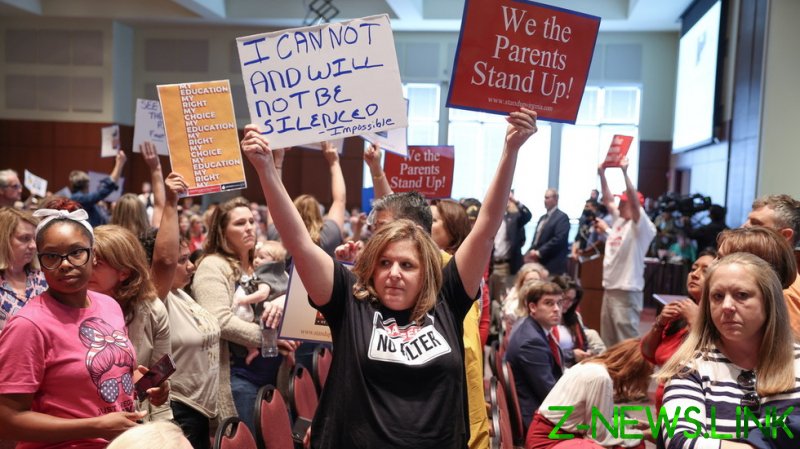 The fiery Tuesday meeting of the governing body for public schools in Loudoun County, Virginia was held to hear the public’s concerns over a draft transgender policy change. Proposal 8040 would allow students to freely declare their preferred gender identity, names, and pronouns, and to receive access to sporting events, locker rooms, and bathrooms accordingly.

The session, however, turned into a protest of conservative parents who objected to the direction the school board has taken, particularly regarding critical race theory (CRT) – which views American history and society through the lens of systemic racism. Opponents perceive it as racist in nature and don’t want it to be taught at school. The LCSB denies it promotes CRT at schools under its supervision, though some evidence points to the contrary.

Around 250 speakers signed up to submit their comments during the event in the town of Ashburn. Protest and counter-protest rallies were held outside the building, each with dozens of participants.

The meeting started out with several speakers supporting the proposed transgender policy change. Tensions escalated, however, after a speaker who identified herself as the mother of a transgender student said “hate” was “dripping from the followers of Jesus in this room.” She was booed at, and the board called for a recess, but tempers didn’t die down.

One of the issues repeatedly brought up by those critical of the board was the controversial suspension of elementary school PE teacher Byron ‘Tanner’ Cross. He was placed on leave for a month for remarks he made at a public comments meeting in May. He said he would refuse to follow the rules regarding preferred names and pronouns for transgender students, as set out in proposal 8040, calling them harmful for children and sinful. The suspension was overturned earlier this month by a district court, which granted Cross’ request for a temporary injunction on First Amendment grounds.

The school board meeting culminated with a speech by Dick Black, a Republican and former state senator, who berated the LCSB for its policies, including “teaching children to hate others because of their skin color.” The accusations were met with loud cheers from supporters. The board then voted unanimously to cut the public session short.

Tensions escalated further when some people refused to leave until everyone was given the chance to speak. The Loudoun County sheriff’s office was called to intervene, as protesters shouted, “shame on you.” The meeting was declared to be an unlawful assembly by the sheriff’s office and people were threatened with trespassing charges.

Most of the protesters left peacefully, though two people were arrested. One of them was issued a trespassing summons and released, while another who allegedly acted aggressively was taken into custody and charged with disorderly conduct and resisting arrest, the sheriff’s office said.

Tuesday’s public comments meeting was the last one scheduled for this academic year. When the meeting ended, only about 50 members of the public had spoken.