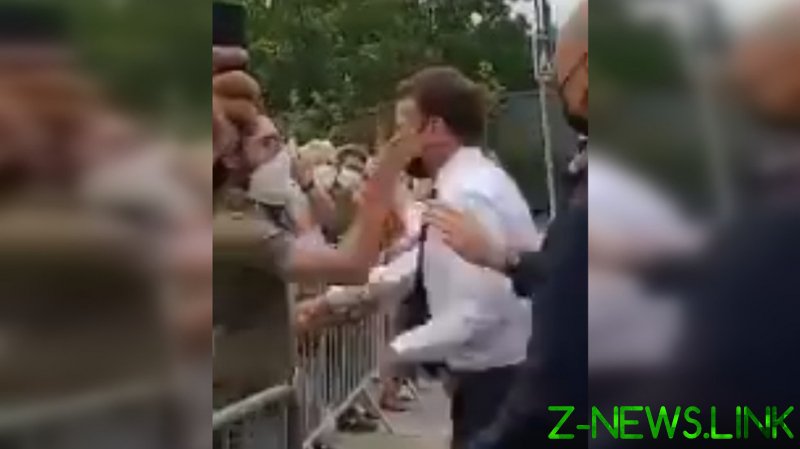 Macron was visiting the department of Drome in southeastern France when the incident happened. The president was meeting restaurateurs and students to discuss the nation’s recovery after the Covid-19 pandemic. At some point, he decided to approach a crowd of onlookers in the village of Tain-l’Hermitage.

A video circulating on social media shows the president, dressed in shirt sleeves, reaching out his hand to a crowd of well-wishers standing behind a metal barrier. A man wearing a mask and glasses then suddenly grabs him by the arm before apparently hitting him in the face and shouting “Montjoie Saint Denis” and “Down with Macron-ism.”

Presidential security then rushes to intervene and pushes the man to the ground while ushering the president away. The Elysee Palace confirmed there was an attempt to “strike” the president but made no further comments.

The reasons behind the incident are unclear, although the “Montjoie Saint Denis” slogan is known as a French battle cry from the times when the nation was a monarchy. It remains a royalist slogan nowadays.

Two people were arrested in the wake of the “attack”, according to the French media. Their identities have not been revealed.The incident was promptly condemned by the French political class.

Prime Minister Jean Castex branded it an affront to democracy. “It is quite clear that it is democracy that has been targeted,” he told the National Assembly just minutes after the incident. The MPs also unanimously denounced the incident and expressed their support of Macron.

Even some of the president’s political opponents expressed solidarity with him. “If the democratic debate can be bitter, it can in no way tolerate physical violence,” said the head of the right-wing National Rally, Marine Le Pen, adding in a Twitter post that she “strongly condemns the intolerable physical aggression which targeted the president of the Republic”.

The leader of the leftist ‘France Unbowed’ party, Jean-Luc Melenchon, also said he was “in solidarity” with Macron while branding the attacker as a member of the “royalist extreme right.”

“No disagreement can justify physical assault. Hopefully, this time everyone finally understands it,” he added.