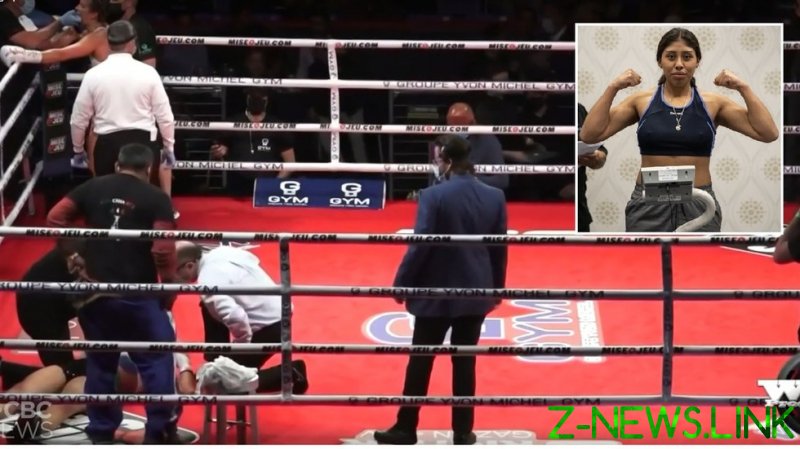 Zapata was stopped after taking a barrage of unanswered strikes in the corner during last weekend’s fight against Marie-Pier Houle in Montreal, with video footage of the jarring incident having been posted online.

The Mexican boxer was fighting in her sixth professional bout at the GYM Gala Boxing event where she was taking on hometown fighter Houle.

Reports from ringside state that the referee stopped the fight in the fourth round after Zapata failed to answer a series of punches – but while the official’s stoppage was likely a precautionary measure, it soon became clear that Zapata had sustained serious injury in the contest.

With Zapata still being seen to by the referee and members of her team, Houle reacted to the stoppage in celebration – before it became clear that Zapata was convulsing.

She was then laid down on the canvas before being rushed to a nearby hospital where doctors subsequently described her condition as “critical but stable“.

“She was sedated in order to rest her body and her brain. The doctors didn’t give her much of a chance initially, but they find her situation has improved a lot.

“The next two to five days will be critical and she will be kept sedated for that period.

“The next six weeks will then be critical in determining if there is damage and how much damage it has.”

Zapata’s opponent, meanwhile, has also sent well-wishes to her rival and said that she and her team are keeping their “fingers crossed” that she makes a fully recovery.

“This is not the thing you want to see,” Houle said.

“I was definitely going for the knockout, but I would have preferred her to come out on her feet, not lying on a stretcher.

“We’re keeping our fingers crossed that everything goes well.”

Several figures within the sport have also sent their support to Zapata in her bid for recovery.

WBO junior lightweight champion Jemel Herring wrote online that he is “praying for Jeanette Zacarias Zapata, as she’s battling for her life, in ICU,” while for IBO and WBC world champion Hannah Rankin also asked fans to keep the fallen fighter “in our thoughts“.

“Let’s keep Jeanette Zacarias Zapata in our thoughts and prayers so that she makes a full recovery after last night’s fight,” she wrote online.