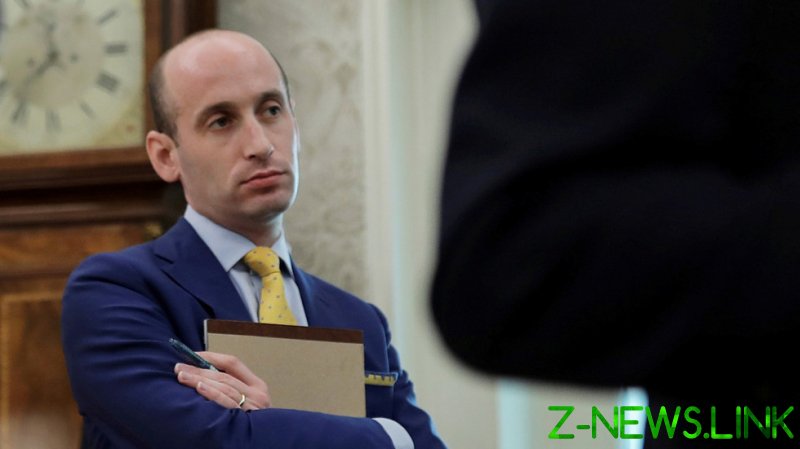 Miller has been working remotely and tested negative for the past five days, but turned up a positive test on Tuesday and was quarantined, multiple outlets reported citing a senior White House official.

The news triggered an outpouring of vitriol on social media last seen in May, when Miller’s wife Katie – an aide to Vice President Mike Pence – tested positive for the virus.

“There is a god,” tweeted the Gravel Institute, which describes itself as the left’s answer to Prager University.

Musician Mikel Jollett tweeted sympathy for the “families of the 26,000 innocent children” that Miller “threw in a cage.”

Former DNC staffer and activist Adam Parkhomenko accused Miller – who is Jewish – of being a member of the KKK.

Resistance Twitter star Eric Garland, of “game theory” Russiagate fame, laughed that there was “some form of organic matter not completely repelled by Stephen Miller.”

Less famous online liberals also chimed in, calling Miller subhuman or posting memes depicting him as a bat or a vampire.

Miller may be the one member of the Trump administration more hated by the Resistance than the president himself. In one instance, he defended immigration restrictions by telling CNN’s Jim Acosta that the poem on the Statue of Liberty isn’t the law of the land.

Resistance Democrats similarly celebrated Trump’s positive test last week, only to fume in frustration when Trump seemed to beat the virus and was discharged from the Walter Reed National Medical Center after only three days.

One exception was Jennifer Rubin, the Washington Post “conservative” columnist, who tweeted “There are times when it is best to saying [sic] nothing” in response to news about Miller, after having a full-on meltdown over Trump.