Home / WORLD / The ‘space billionaires’ are leaving Earth’s orbit in the same mess they’ve left the planet. So how about they clean it up? 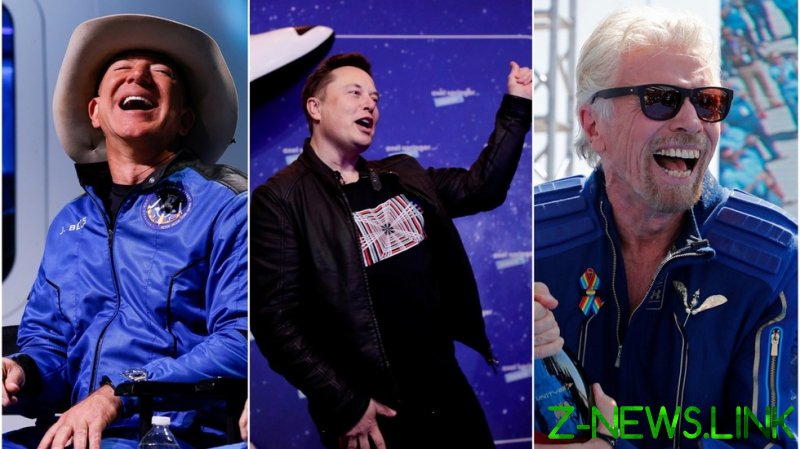 Not only is the junk – metal objects that flake off satellites, spaceships and other orbital debris – literally ‘out of sight, out of mind’, but few are even willing to conceptualize the clean-up of such a mess, subconsciously understanding that not only did they play no part in creating it, they’ve never been to space, much less crossed paths with those who have.

Worse, as ‘the right stuff’ of which astronauts were legendarily made back when every kid wanted to be one was replaced by the fat bank accounts that have slowly taken over from talent as the prerequisite for every career, a set of individuals who positively glisten with the unhealthy glow of excess money have taken over stewardship of space, junk and all.

Such a person is written off as a human sore whose only redeeming value to society is their money – and scorned, because despite the quintessentially American worship of the almighty dollar, they push the limit to the point that even the most devout disciples at the temple of plastic are hesitant to pay them homage.

Few fit the label so well as Jeff Bezos, Elon Musk, and Richard Branson, the three space-travel obsessed billionaires whose overwhelming wealth does not nearly compensate for the unpleasant nature they evince as people.

Bezos not only took over the book sales industry completely, for example, but then began flexing his muscles by removing books from sale in a way that made them essentially impossible to obtain – a mustache-twirling bit of evil that falls somewhere between puppy-kicking and candy-theft from babies in terms of gratuity.

Branson’s smile is so over-rehearsed one almost pities him, until you remember that he spends his billions on self-aggrandizing ‘adventure’ stunts, odious political displays, and can’t see something he admires without wanting to slap not his name, but the word ‘Virgin’ on it, as if daring interlocutors to ask whether he’s compensating for something. (The name actually comes from all members of his first company Virgin Records being “new at business,” according to Branson, who was not, in fact, new at business at the time).

And Elon Musk, who for many flies under the radar by affecting the look of a Batman villain rather than a boardroom reptile or spray-tanned glad-hander, nevertheless is determined to open a window into our most secret thoughts via his Neuralink project, pitched as a way to ‘help the disabled communicate’ in the same breath as it’s gushed it will be installed by an AI-enabled robot (keeping in mind that AI, for all its artificiality, is still programmed by humans, who make lots of mistakes installing their so-called ‘intelligence’).

While they help make a mess out of society, all three men are also making a mess out of space, leaving a trail of hardware, broken-up rockets, and even disjointed international relations in their wake. Musk’s 5G satellite network hopes to deliver internet access to half a million people within the next year and ultimately plans to launch 50,000 satellites, literally blanketing the Earth with its internet services.

Like Amazon’s monopoly over the bookselling industry, Musk seems to have his eyes dead set on becoming the one and only deliverer of internet services to certain hard-to-reach places, meaning that if some user should post something unflattering about him, or wrecks some deal he has poised to go through the following day, they might find their service goes down – and can’t be restored. ‘Point at sky and plug in’ sounds like an easy enough installation tactic for the ground antenna, but Musk’s StarLink project runs off proprietary military technology, not a microwave.

Branson at least tried to deflect some criticism of his insane spending levels by suggesting space travel should be available to everyone – ‘eventually’ – and bringing some of his employees along for the ride (Bezos brought his brother and reached for the social-justice brass ring by taking 82-year-old Wally Funk, trained as an astronaut during a women-only program during the 1960s but never actually given the chance to blast off).

He compensated for his apparent failure to secure “real” astronaut wings by coming off as the biggest douchebag ever to approach the great beyond, smarmily thanking Amazon customers for funding his Blue Origin rocket. Certainly, he owes them that gratitude, but no one wants to be reminded of that as the money is literally burning off into the atmosphere. To infinity and begone, Bezos.

But returning to the subject of space junk, and the billionaires who have seized the future of space for themselves as the once-muscular American public sector is no longer capable of launching space shuttles or building rocket engines. NASA estimates there are about 23,000 pieces of debris larger than 10cm flying through space and 500,000 pieces smaller than that size, and they move so fast that they can cause serious damage if they come into contact with a satellite or other man-made spacecraft.

Given that most satellites are launched with the understanding that when they cease to be useful they will just drift through space eternally, it’s easy to see how the Earth’s orbit got so clogged, but hard to grasp how that might be fixed.

Given all three men’s unshakable thirst for monopolization of whatever industry holds their attention, it would be the least they could do to take some of their money and start cleaning up not only their own mess – particularly Musk’s overpopulation of the night sky with persistent little lights ensuring you can get on Facebook from Antarctica – but the messes that came before, when exploring space was about discovery rather than ego and the spirit of competition, while present, was focused more on that exploration than a glorified d**k-sizing contest.

If they can afford to turn space into a billionaires’ playground, they can afford to keep it clean for everybody else. Musk has even hinted at this in his plans for a Martian colony, noting that human life on Earth could wink out at any moment.

Given there’s no chance of him building enough rockets to rescue every human, animal, and plant on Earth, the least of his responsibilities – and Bezos and Branson’s – should be to revive the Enlightenment concept of noblesse oblige, in which the wealthy take responsibility for those below themselves socially, both out of self-interest – no one wants their head rolling into the streets the next time the poor remember who’s got all the money – and to create a better world.

Musk, Branson, and Bezos could at the very least clean up the space junk orbiting the planet. The Department of Defense does this on a smaller level, but the private sector has developed its skills more thoroughly, since most companies can’t just come hat in hand back to the taxpayer complaining that the latest space shuttle hit the equivalent of the Titanic’s iceberg and billions of dollars have been flushed down the drain.

That’s one choice, at least. The space billionaires could also just do what actress Jameela Jamil suggested last week and substitute “Which billionaire saved healthcare?” or “Which billionaire housed the most homeless people?” for their latest “whose d*** is bigger” competition.

The trio doesn’t seem to like people very much, though, as they’re clearly flying off to space to get away from us. A space clean-up would give them a chance to save face without having to interact with the hoi polloi. How’s about it, then, boys? Make some space for the rest of us to build escape pods? And pay your taxes so we can publicly fund this getaway. We don’t like sharing a planet with you, either.