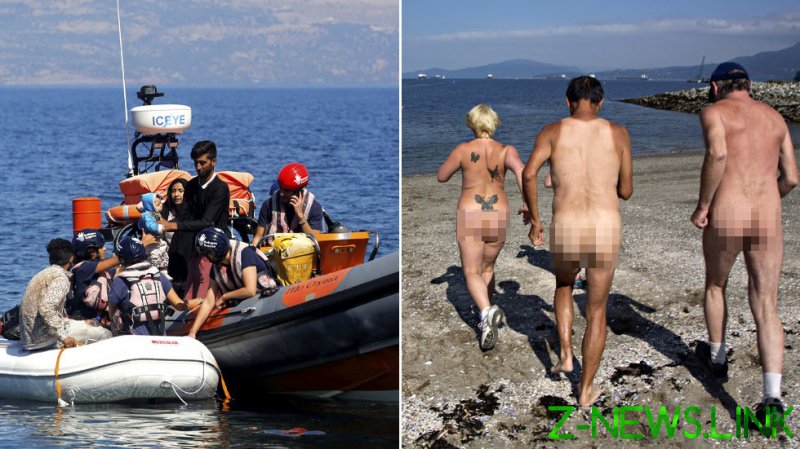 The bizarre incident happened at the Fairlight Glen Naturist Beach on Monday.

Around 80 nudists were interrupted while soaking up the sun, as an inflatable boat with about ten men and one woman was spotted heading for the shore. One sunbather even swam out to the group to check if they were okay.

Jamie Anley, an entrepreneur and father-of-two was on his first trip to the beach with wife Astrid, when the boat showed up. “It was a hilarious situation,” he told the Sun. “We were sat on our towels and I noticed the boat.”

Anley said the migrants seemed to be aged between about 17 and 45 and were evidently stunned by the sight that greeted them.

“Some of the men kept their heads down but some had little smirks on,” he said, adding that some were wearing leather jackets and clearly “not dressed for the occasion!”

The beachgoers were welcoming, even offering the new arrivals some drinks to warm up after their journey.

The group quickly abandoned their vessel, however, and headed off into nearby woods. Police later confirmed they had been located and detained.

“You couldn’t write it,” another nudist named Jamie told the Sun. “Police turned up looking for migrants on a beach full of naked people. We were in disbelief at what was going on.”

September has already broken records as the busiest month for small-boat migrant crossings in the English Channel. According to authorities, 1,487 people were detained so far this month.