Home / sports / Ukrainian Malinowski has extended his contract with Genk

Ukrainian Malinowski has extended his contract with Genk 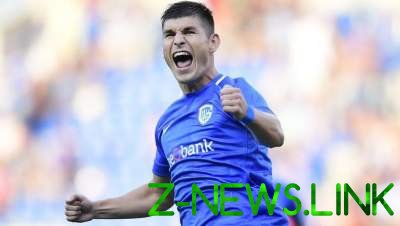 Ukraine midfielder Ruslan Malinovskiy has signed a new contract with the Belgian “Genk”.

Malinowski five games of the season scored five goals and gave two assists, than attracted the attention of clubs from the top European Championships. So, the sentence on Malinovsky did the Spanish “Celta”, but Genk for 7 million euros did not agree to sell their key midfielder.

The Ukrainian decided not to force the transition to a new level and signed with “Genko” the new contract runs until the summer of 2022. The term of the previous agreement Malinowski with the Belgian club expires in three years.

“At the moment I want to progress along with Genk. Now we have so many games that just try and concentrate. On training, on playing, on the recovery.”

I have a club on good terms, and I respect his every decision. Will be some offer, we’ll discuss

It is impossible to say and think that I have outgrown the level of Gena. Of course I want to try myself somewhere else, but to think I don’t want to. Need something here to first achieve. In the championship of Belgium is a very good level”, – quotes the words of Malinowski, “Team No. 1”.

Ruslan Malinovskiy moved to Genk from Shakhtar in January 2016. In 89 matches, the Ukrainian scored 19 goals and gave 18 assists.