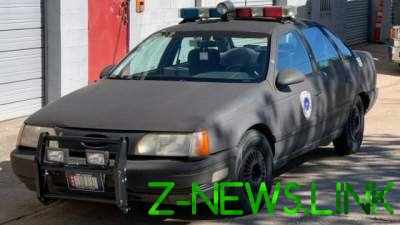 The car is auctioned.

Most Ford Taurus appeared on the screen in “Robocop” (1987) – the Golden age of Director Paul Verhoeven.

Those 15 minutes provided a world-wide fame and even guaranteed his place in cult movie poster. Probably just after its release, countless Taurus was released in police uniforms to match the police vehicle fleet from “Robocop”, paying close attention to detail. On the instrument panel of this matte black ’86 Taurus LX – signed by Peter Weller.

The car was used at the anniversary event Robocop a couple of years ago. In addition to the autograph of a movie star in the cockpit of the Taurus also has a variety of bolt of vintage technologies – that is to say, to complete the image.

Unfortunately, at present, Taurus is not working. However, anyone who has access to removable engine control unit of the vehicle, will be able to return the iconic car on the street in no time. Aged appearance matches the image in the film.