The horror called “the furniture” 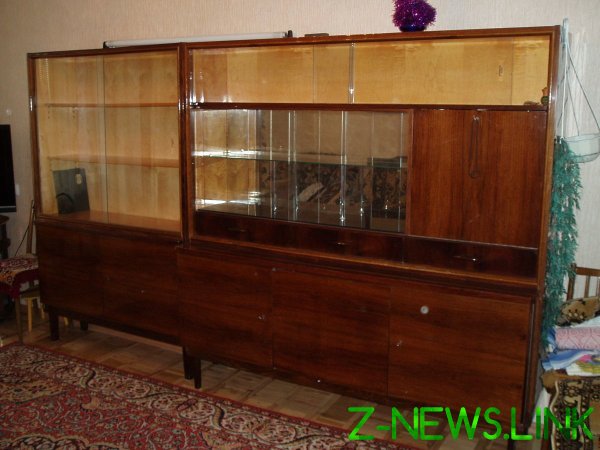 So, friends — today will be a post on an interesting topic, which in some sense concerns everyone is miserable Soviet furniture, among which grew the most of us, and many in apartments-boboshtica she continues to stand still. Previously I was a mystery — why in a country that made missiles was such a miserable, dysfunctional and simply terrible furniture? And the answer to this riddle is extremely simple — this is a clear indication of the priorities of the state in which the quality of life of the population always was in last place.

As I wrote above — shovels furniture continues to stand in many homes now and if you have something, something I’ll discuss in today’s post — I recommend it immediately and throw it off the balcony, then you will be surprised how much nicer will be in the apartment.

So in today’s post — the story about the terrible Soviet furniture. Make sure you check out the article below, write your opinion in the comments, and of friends added do not forget. And telegram channel also subscribe)

From the history of the furniture question.

All the years of its existence the USSR was a poor country, and before the war — and poverty-stricken. The state is thinking about total collectivization and the continuous injection of public benefit, but the ordinary people lived worse and worse. If you look at the life of an average citizen 1920-1930-ies, we can see that the new furniture in their homes at all. Till 1940-ies of the country “eats” more Royal inventory of furniture and interior items — all movies of the pre-war era can be seen bentwood chairs, heavy oak tables and carved cupboards, tall wardrobes and other similar conditions.

That produced from the furniture in those years? Was made of armoured beds (often in a small bed workshops for large enterprises), manufactured hotel furniture, collected in small cooperatives, mainly, simple kitchen cabinets, knocked out of the laminated shield, cupboards, stools, easy chairs and bedside tables. All this was produced by artisanal way, lost their nails and painted a very simple oil paint.

After the war, the government has decided that now would be a good idea to think about the comfort of the country of developed socialism, and started to produce furniture sets, but closer to the seventies — the so-called “sections” which are well familiar to all of you. More began to appear soft armchairs, sofas and stuff like that. More or less high-quality headsets were rare and immediately became a deficit, the queue for which you could sell or give such an episode is shown for example in the Soviet film “Adult children” of 1961.

From personal family history — my grandfather, to more or less decently furnished apartment, went to the end of the fifties in Vilnius for a furniture set for the bedroom — brought back the tricuspid wardrobe, couple of chairs and tables more or less decent view, covered with varnished veneer. In Minsk you can buy just roughly assembled kitchen furniture, like a sideboard or chest of drawers, painted with white paint and collected in the same cooperatives. It was sold in the shop “Furniture”, which was on the Avenue near Victory square — bought furniture heroes who starred in Minsk of the film “Our neighbors” (1957) and approximately in the same years, bought furniture, my grandmother.

Here, I specifically found an old photo from my grandmother’s apartment. The left frame — veneered cupboard in prichoski brought from Vilnius. In the second photo in the kitchen at the window you can see Uralskiy white buffet in Minsk fifties was only this: 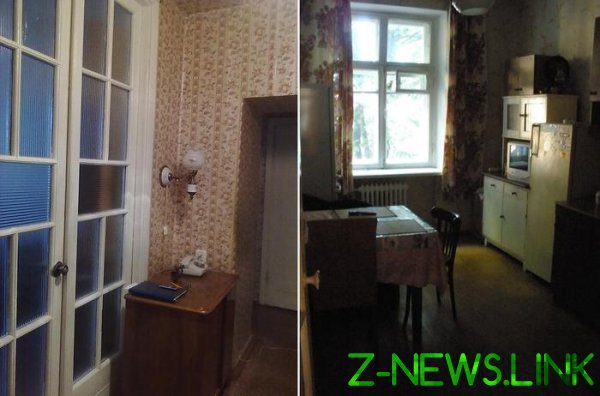 What do they have?

While in the West, the other socio-political system, all developed differently. Do not believe those who shows on the USSR of the sixties and saying, “Oh, so it’s all echoes of war!” Polovinnaya Germany, ravaged by Hitler and the war reached the pre-war level of production already by 1951, after only 6 years after the wars, continued to develop rapidly, so it’s all in the quality of governance.

In post-war Europe, one after another began to appear, the company which produced high-quality, yet affordable furniture. Many small businesses, who had been fakticheski something like Soviet collectives (where 10-15 people manually collected tables and chairs) has acquired industrial facilities and pipelines — it was impossible to make the furniture more affordable and accessible.

Perhaps the most famous of all was the IKEA, she began to develop in the postwar years in Sweden, which had formed a coalition government of social Democrats, which carried out the liberal politico aimed at economic growth — and the growth was amazing crescendo.

That’s when IKEA became popular, she was offering inexpensive but quality furniture is a significant reduction in price of product has been achieved through self-Assembly furniture buyer, and a multiple reduction of logistics costs — all furniture was fully assembled in flat boxes and did not require a lot of space. In addition, this furniture has a beautiful minimalist design, which itisalso in any interior.

Now let’s see what happened in the USSR.

As in everything that was related to everyday things, the Soviet Union was at loggerheads furniture design have the same IKEA, but did so poorly, poorly and without an understanding of technological processes. For example, the “square” design furniture of the seventies in the West was dictated by the conditions of her build — she was sold unassembled in flat boxes and took up very little space in the car upon delivery.

In the USSR simply stupidly copied the appearance, especially without going into technical details. It was often bad — because first, the design was mediocre at loggerheads, and second — worst was the quality of the furniture and the rest. In the absence of competition, no one thought about the beauty, the technologist-designer looked at the designer and said something like — “here you have it says “keyway” is expensive and long, taking care of the usual typical nail — and so will buy!”.

Thus was born the Soviet furniture freaks, well all of you friends. First, it is the furniture, which is sometimes referred to as the “section”. Canonical shovels wall unit looks like this and is always half the room — that makes the narrow rooms of prefabricated houses in a very narrow “pencil cases”. Doors often were crooked and slanted, hardware was bad and as a whole in comparison with the same IKEA those years it looked pathetic: 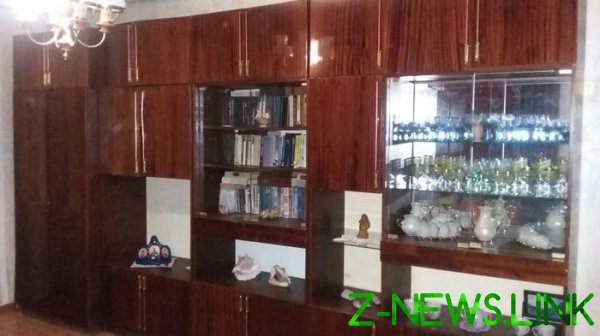 Secondly, of course, the cupboard — bought it often in a very small Khrushchev with “room” for 12 square meters as a reduced analogue of the section. The quality was poor — sideboards often staggering under the legs had to lay a folded cardboard four times. In contrast to the light ikeevskogo materials, the Soviet sideboard has been manufactured from heavy and thick chipboard, which was of low quality, loose — at damage of the top layer it can be retrosite finger. 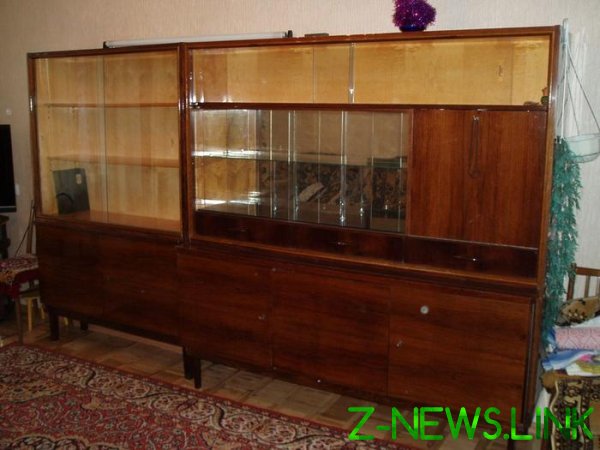 The third is a terrible and miserable sovdepovskih “table-books”. The Soviet model table-the book was “our answer to IKEA” in terms of folding furniture, but it’s represented an incredible misery — he was heavy, awkward, bow-legged, and in addition, unlike ikeevskogo tables — generally could not be used fully assembled. Once assembled, it was sleek and clean Burgundy quadrangle, reminiscent of the mausoleum of Lenin. Sitting behind him was impossible — the mausoleum can only admire. 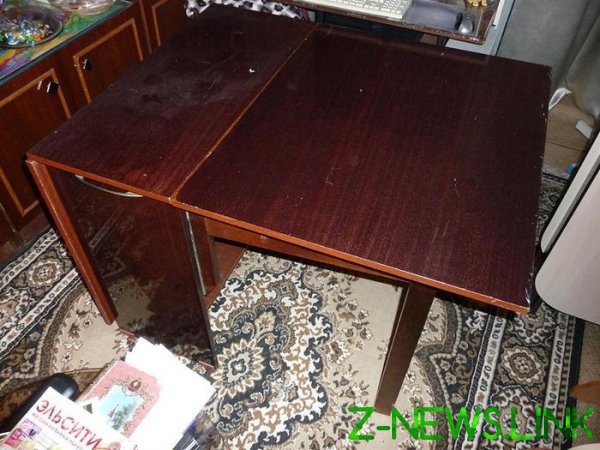 The fourth is a dreadful and miserable shovels chair. They looked the same as always — rickety rickety construction that had started to hang out after a year or two of use, szweda upholstery — usually, or dark, or servigliano-sickness. No shovels chair (specially made in the seventies and later) does not arouse the desire to buy it as “vintage furniture” — over the years, all misery was even more explicit: 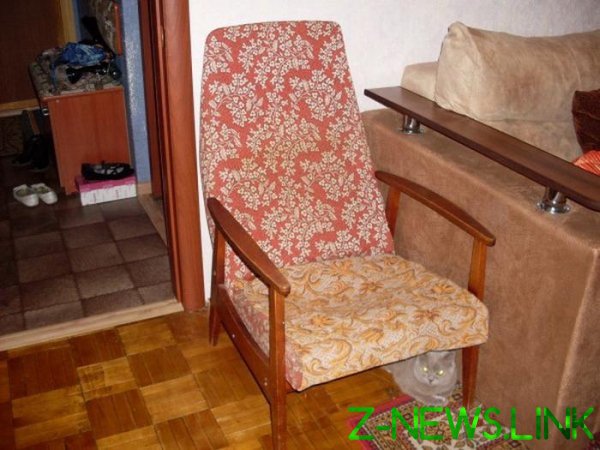 The fifth is incredibly creepy shovels sofasthat his misery and formlessness are most reminiscent of the Soviet electric guitar — if the guitar in the Soviet Union made such that people didn’t really play rock music, the sofas apparently did such that in the USSR there was no sex)

Typical Soviet sofa is always something shapeless, without style and very poorly constructed. These sofas are usually uncomfortable was pitched up and fast break — very often flew marginalia. Remember, we have shovels at home of the sofa broke off the wooden armrest on the side (terribly inconvenient, which constantly hurts bumped elbows) — it turned out that this heavy item was entirely planted on a small glued wooden spike, and it was just a small effort to completely break off the armrest. 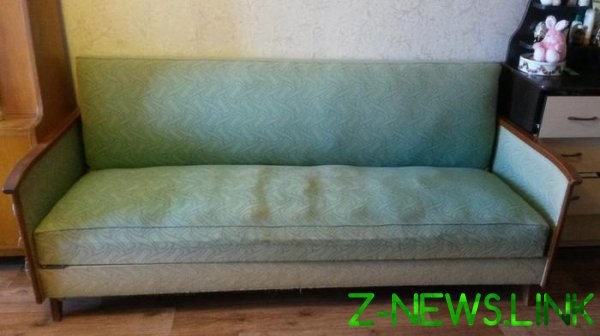 Sixth — this is incredible shit, which in the Soviet Union were offered as kitchen furniture. Soviet furniture was of the same consistently poor quality that all the rest is a heavy door that after a while, hung down awry, the poor quality of particleboard — the material was too soft, but thick and heavy, the lack of clear design — in short, Soviet cuisine is perfectly complemented everything else. 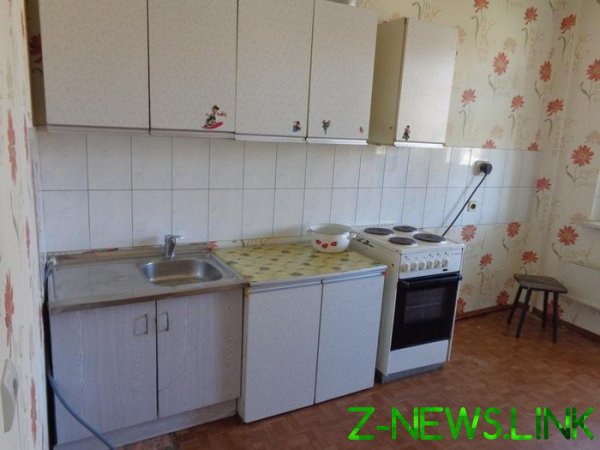 At the end you can still remember about the terrible shovels closets about bed — or rather, about their absence. In small Soviet apartments normal bed with a normal mattress was a rarity — an entire generation of Soviet people slept on single “Ottomans” and most of those pull out sofas.

Do you remember the furniture? Maybe now something else keep one of those kits? What can I say about it?