Home / INCREDIBLE / The earth collided with a comet 13,000 years ago

The earth collided with a comet 13,000 years ago 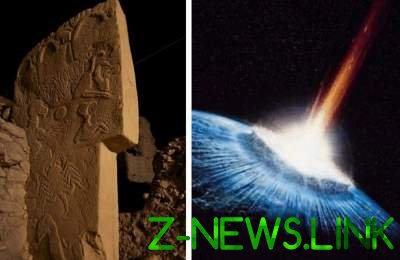 This mini ice age known as the younger Dryas.

The researchers translated the famous ancient symbols in the Turkish temple, and they tell the story of the devastating collision with a comet more than 13,000 years ago.

Check this event with the help of a computer simulation of the Solar system around the same time, the researchers suggested that the characters could describe a collision with a comet, which occurred about 10 950 BC – around the same time, when did the mini ice age that forever changed civilization.

This mini ice age known as the younger Dryas lasted about 1000 years, and he is considered the critical period for mankind, because at this time there is agriculture and the first Neolithic civilization, perhaps in response to the new colder climate. The period was also linked to the disappearance of the woolly mammoth.

But although the younger Dryas was carefully studied, it is unclear what caused this period. A collision with a comet is one of the leading hypotheses, but scientists have been unable to find physical evidence of a comet around that time.

Scientists from the University of Edinburgh in the UK say that these carved symbols found in the oldest known temple in the world – Göbekli Tepe in southern Turkey, suggests that a comet caused ice age.

Character translation also suggests that Gobekli Tepe was not just a temple, supposed to be, it could also be an ancient Observatory.

“It seems that Göbekli Tepe was, among other things, an Observatory to observe the night sky,” said researcher Martin Sweetman.

“One of the pillars seem to have served as a monument to this devastating event – perhaps the worst in history since the end of the ice age”.

It is believed that Göbekli Tepe was built around 9000 BC – about 6,000 years before Stonehenge – but the symbols on the column date this event about 2000 years before.

When you consider that, according to astronomers, this gigantic comet, probably arrived in the inner solar system about 20-30 thousand years ago, it would be very noticeable feature of the night sky, it is difficult to understand how ancient people might ignore this event.