Home / sports / The 2020 Olympics in Tokyo was postponed for a year. Whether it takes place at all? 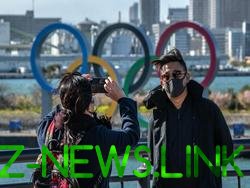 For many athletes the chance to participate in the 2020 Olympics in Tokyo have already lost. They are old, overworked or just can’t wait for the Olympics delayed for another year due to financial problems.

35-year-old Tetsuya Sotomura is one of those athletes. I met him earlier in the week at practice. At noon, in the heat, at the site, a former plant North of Tokyo, he trained hard on a huge trampoline. Sotomura flew into the air and started doing pirouettes.

In 2008 at the Beijing Olympics he took fourth place to the bronze bit is not enough. Since then he is struggling with injury because of which missed Games in 2012 in London and 2016 in Rio.

The game in Tokyo was to become his last triumph – the Olympic games in his hometown would allow him to finish his career on a high note. But after a year it will be already impossible.

If in 2008 the Beijing Olympics was postponed for a year, I’d say, “well, can I have another year to train, another year to grow, says Sotomura. But now I am 35 years old. Year for me is a long time. So I decided that I just have to leave the sport.”

There is another reason why Sotomura decided to go with the trampoline. He thinks that the Olympics in Tokyo will be held next year.

“A lot of uncertainty. Nobody knows, what is the probability that the game will be held. If next year we are waiting for a cancellation, then I just wasted a year without result. It was another reason to leave,” he says.

In Japan, the Olympics was looking forward to, but after January this year began pandemic coronavirus, the enthusiasm began to subside. The government closed the borders to protect the country from Covid-19, and many Japanese do not want to be found ahead of time.

In cities where sports events were to come to the foreign athletes coming television reporters, asking local residents how they are preparing to accept them. One city North of Tokyo, where there had to arrive the Brazilian national team, during one such interview was obviously hard to portray enthusiasm.

A recent poll Agency Kyodo showed that only 23% of Japanese support the idea to hold the Games next year, if contagiousness Covid-19 in the country will remain at the same level.

According to the latest statistics from the world health organization, reasons for optimism, not so much. The number of infected in the world has exceeded 15 million, and every four or five days is added about one million.

From USA to Brazil and from India to South Africa contagiousness is growing, and efforts to combat the virus are not met. The year is, of course, for a long time, but many experts believe that by next summer, the epidemiological situation does not change much.

Professor Kentaro Iwata from the Medical University of Kobe in Western Japan is convinced that the only path to the Olympics is the vaccine for coronavirus.

“If there is wakina, everything will change,’ he says. The first and second phase of the tests gave promising results. I have not lost hope”.

“But vaccines, in General, do not destroy the virus and reduce the infection by about half. So I don’t think the virus can be destroyed. Rather [even with the vaccine], the pandemic will continue for another year!”.

Professor Iwata is particularly interested in the situation in the United States – a country that more than others pay for the Olympic games.

“The United States will suffer from the fashion industry, many more months, he said. – Can athletes from the United States to move here? Is it possible to hold the Olympics without them? Probably not. Priority should be the safety of the athletes and the Japanese people”.

“American broadcasters may not like it, but what is the Olympics is a TV show or sporting event?” – asks the scientist.

There is one at first glance a simple solution: postpone the Olympics in Tokyo for another year, until 2022. The probability that by the time the pandemic ends, much higher.

However, such a measure, the Japanese government has excluded. Dick pound, member of the International Olympic Committee since 1978, has agreed to speak with me from his home in Montreal.

“It’s not something that can wait until 2022 or 2023. I don’t think it is fair to leave Japan in limbo even longer. When we understand that athletes to go there safely, we will make every effort to ensure that the Games took place”, says pound.

“However, if health services in Japan or other countries will decide what to ride is unsafe, then we will have no choice but to say: “nothing to Do, pandemic – a new war”, – he added.

World war in the history of the Olympic games were the only two reasons for their cancellation. Because of the two world wars was cancelled two Olympics, including (you guessed it!) games of 1940 in Tokyo.

There is, finally, one last idea. Simplified game in which the athletes will undergo quarantine and spectators from other countries to invite not.

Dick pound says that it also will not work.

“As they say in North America, or you have a fish or bait, he says. – Japan will have to decide if they want to host the games, or the risk is too high? If the latter, then Japan will probably offer to cancel the games, and the IOC will take this offer”.

Thursday night at the Olympic stadium in Tokyo hosted a ceremony resetting the clock, counting down the time until the next Olympics. Until new the opening ceremony was exactly one year. Prime Minister Shinzo Abe insists that the Olympics should be held. But Covid-19 hardly hears it.