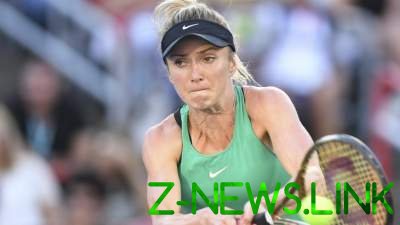 The first racket of Ukraine Elina Svitolina in a serious match snatched a place in the third round of the Cincinnati tournament category WTA Premier 5 with prize money of $2,874,299.

At the start of the match, Svitolina took 4:1, but quickly lost their advantage. At the end of the set Kuznetsova with the score 6:5 on his serve and failed to convert set-bol. In the tie-break, Svitolina punished the opponent for a missed chance, beating the Russian with the score 7:1.

Second set Svitolina started with a break – Kuznetsova quickly responded and returned the match into a competitive direction. In the 10th game when the score was 4:5 Elina did not hold his serve and allowed the rival to even the score.

In the deciding set Svitolina made three breaks and not without problems kept the winning score.

In the match against Kuznetsova, Svitolina made 37 winnershow and made 37 unforced errors, and has implemented 8 of the 17 break points.

For a place in the 1/8 finals in Cincinnati Elina Svitolina will face the winner of the match between Amanda Anisimova and Petra Martic.