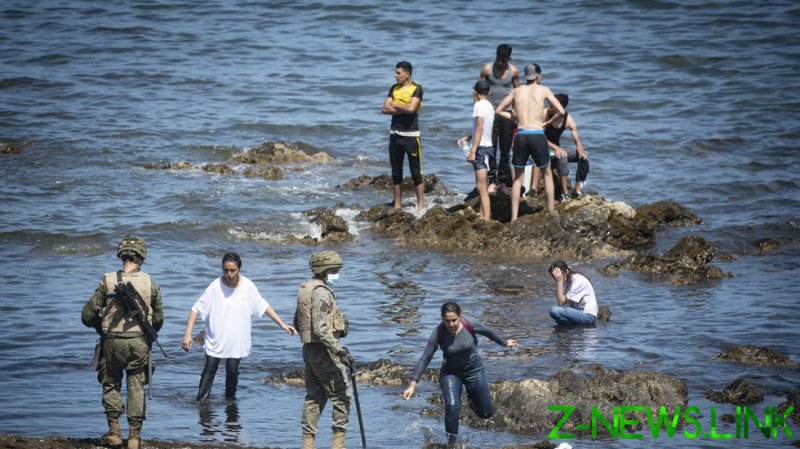 Shocking video of Spanish border forces shoving desperate migrants clambering over rocks back into the sea, while beating them with truncheons, is not the most edifying spectacle or a sign that Madrid is on top of events at its troublesome African enclave of Ceuta.

It followed several days of violent confrontation, with thousands of migrants bidding to force their way into the port city, having made their way across the Western Sahara and urged onwards towards Europe by the Moroccan government, as relations with its Spanish neighbour hit a rocky patch.

And it’s put pressure not just on Spanish-Moroccan relations, but also those between Madrid and Brussels as the Spaniards continue to resist pressure to call in Frontex, the armed EU border police at the disposal of the bloc’s 27 members.

Unconvinced of their effectiveness – with one eye eastward on events in the Aegean Sea, where Greece has encountered difficulties – Spain prefers a bilateral approach to the problem, aware that turning to Frontex to bolster its border defences would mean ceding some control of the situation to the Warsaw-based organisation which operates under a broader EU-focused mandate, not necessarily attuned to the local complexities in play.

But then, the Moroccans know of Spain’s distaste for Frontex and decided to exploit that as a political gambit.

The move came after Madrid had upset Rabat by admitting Western Sahara independence leader Brahim Ghali into Spain for Covid-19 treatment. Its African neighbour reacted by opening the border gates and allowing a flood of around 9,000 people to surge into Ceuta in just a few hours.

Ghali, the general secretary of the Polisario Front, is a living legend for his followers in Morocco, but considered a rapist and torturer by his detractors in Rabat. That made his admission to a hospital in Logroño, in Spain, problematic.

While most of the adult migrants have been returned to Morocco since the influx early last week, more than 700 unaccompanied minors, many under the age of ten, remain in legal limbo, stuck in ad hoc accommodation aboard a Spanish ship while authorities figure out what to do with them.

Madrid is aware that Morroccan officials knew exactly what they were doing when they flung the gates open. An editorial in El Pais newspaper said the actions had identified its neighbour as “an arbitrary power capable of unscrupulously using the desire of its own citizens to emigrate and putting at risk the lives of thousands of minors with whom it has a special duty of protection.”

As the newspaper points out, this type of spat has happened before, and it will happen again and not just in Ceuta. Turkey also periodically threatens to open its borders to allow immigrants from the war-torn countries of the Middle East to make their way into Europe, while Italy has ongoing discussions with its North African neighbours about stemming the flow of people across the Mediterranean.

The solution to these issues, as determined by Brussels, is the proposed migratory framework it expects all members to sign up to, which would then place a legally binding duty upon all nations within the bloc to take in their allocated share of migrants, as they reach the shores of Europe.

Talks about that framework are on pause for the time being until the results of September’s federal elections in Germany are known. That gives everyone a clear indication, as if it was ever needed, of who exactly is calling the shots in Europe.

It also explains the reluctance of Spain to call on Frontex, an armed force headquartered thousands of miles away under orders to unelected EU bureaucrats with a very specific agenda of their own – and one not necessarily in sync with how Madrid sees things in its own backyard.

No one can blame Spain for being suspicious of Frontex and its eagerness to stick its nose into Spanish affairs. With land, island and African mainland borders, not forgetting the contentious issue of Gibraltar, maintaining a close eye on Spanish sovereignty requires the skill of the most adept plate-spinner.

Calling Brussels for help would upset that clever balance and Frontex storming in would see those plates come crashing down around their feet. A firm and unequivocal ‘Gracias, pero no gracias’ is the right decision.