Home / sports / Shakhtar are without three players lost to Zorya

Shakhtar are without three players lost to Zorya 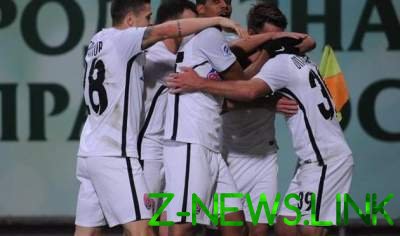 The Central match of the 19th round of the Ukrainian championship has ended in great scandal.

Final game of 2017 was developed according to the scenario of Shakhtar in the 65th minute Ivan petryak is a response to canopy Bernard, scored his first goal in the Pitmen’s shirt.

After a quarter of an hour Petryak controversial moment received a second yellow and left Shakhtar in the minority. “Dawn” without much success went to the final assault, but soon referee Serhiy Boiko for a foul in midfield was shown a second yellow and Fred.

In injury time substitute Butko played a hand – Boyko awarded a penalty and sent off Rakitskiy, who is too aggressive resented the judges ‘ decision. Silas confidently converted a judicial sentence. It seemed that the match ends in a draw, but after two minutes unsuccessfully Pyatov parried the blow Andrievsky, and the ball after contact with Butko crossed the goal line.

Shakhtar suffered their third defeat of the season and missed the chance to break away from the Dynamo six points. “Dawn” also progressed to the fourth place.