Scientists saw a planet where a year lasts 19 days 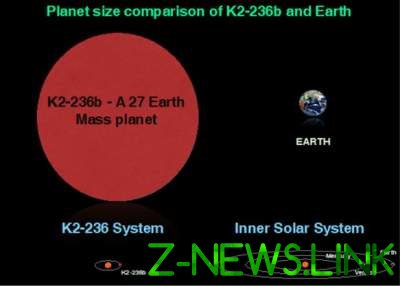 The exoplanet is about 600 light years from us.

For the first time the heavenly body was spotted by the Kepler telescope, but a team of Indian scientists has confirmed that this is a planet, not a comet or other astronomical object.

Illustration: ISROПо according to researchers from the Observatory of Gurushikhar Laboratory for physical research at mount Abu, the planet revolves very quickly around a sun-like star, so a year on it lasts only about 19.5 earth days. . K2-236b is about seven times closer to its star than Earth is to the Sun. This means that the surface temperature of the planet may reach 600 degrees Celsius, and the life on it is unlikely.

The discovery could help scientists understand how planets of such size are formed so close to their stars-hosts.