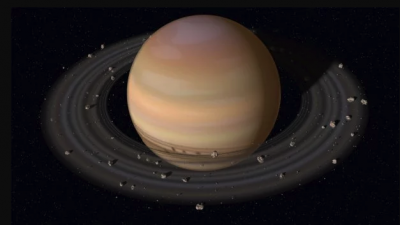 Satellites can have different colors due to different distances from Saturn.

NASA scientists have proposed a theory for why Saturn’s rings have received exactly the same color. This was made possible thanks to the data that transmits the apparatus Cassini.

As is known, satellites of Saturn (now known to more than 60 of these), are the cause of rings around the planet. The rings could have appeared due to the gradual destruction of satellites. So, some of these satellites have a peculiar shape and strange color.

Thanks to data collected by Cassini, the experts analyzed the shape, composition, structure and environment of the five satellites of Saturn, Epimetheus, Pandora, Atlas, Daphnis and pan.

What is the matter? Scientists proved that satellites can have different colors due to different distances from Saturn. For example, a pan having a red color and closest of these satellites to the planet, consists of iron and organic compounds in the main rings.

Pimeta, which on the contrary is the farthest away and has a blue color, probably exposed to flow of ice particles or water vapor from volcanoes, which occur on one of the largest and most remote moons of Saturn – Enceladus.