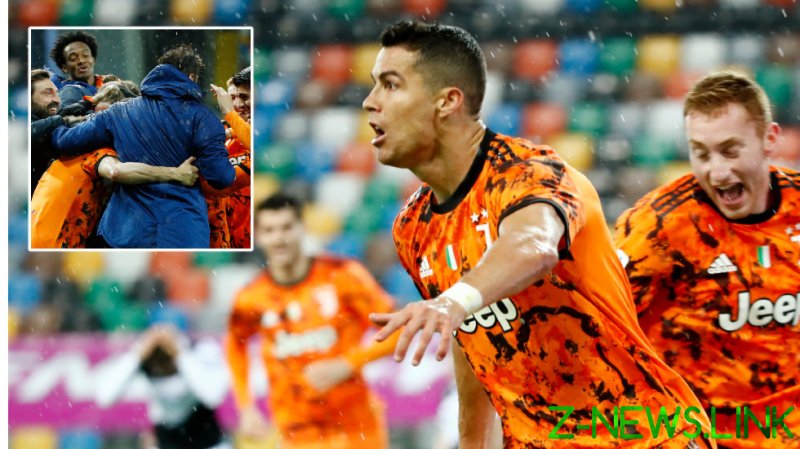 Reports before kick off claimed that Pirlo could be fired if he failed to win at the Stadio Friuli, and Nahuel Molina’s goal after 10 minutes threatened to derail the visitors’ quest for a consolatory Champions League place, as well as the 2006 World Cup legend prospects of seeking a new employer by the turn of the week.

Argentina international Rodrigo De Paul caught the Old Lady napping with a quick free-kick which sent compatriot Molina down the right flank, unleashing a vicious strike that sneaked past Wojciech Szczesny despite the Poland goalkeeper managed to apply a touch to it.

Taking their lead down the tunnel at half time, Udinese started strongly again after the interval with Tolgay Arslan hitting just wide.

When Ronaldo had a weak attempt smothered easily, Juventus looked as though they might never find a way through.

But the Serie A top scorer always does, with De Paul going from assist hero to zero by putting an elbow on the five-time Ballon d’Or winner’s free-kick in the box.

After CR7 smashed the resulting penalty past Simone Scuffet, who was starting his first game for Udinese since 2018, the visitors went for the jugular.

“I am angry because my team put in a great performance and I am here to protect their hard work,” he raged.

“The Ronaldo free-kick that led to the penalty should’ve been a free kick in Udinese’s favor instead.

“I am a veteran of football, so I’ve seen before those who cling to complaining over the lack of first-half stoppages to intimidate the referee.

“Then after that, the referee can give a penalty for a free kick that was non-existent. It’s [Juventus winger] Juan Cuadrado who fouls [defender] Jens Stryger-Larsen, not the other way round.

“It was a blatant error and cannot be ignored. I believe the referee was influenced by this verbal assault at half-time by the Juve directors, staff, coaches and players.

“The way they were behaving, it was as if they’d lost because there weren’t 40 seconds of stoppages.