Home / WORLD / Joe Biden and Boris Johnson sign ‘New Atlantic Charter’, but the world may have moved on

Joe Biden and Boris Johnson sign ‘New Atlantic Charter’, but the world may have moved on 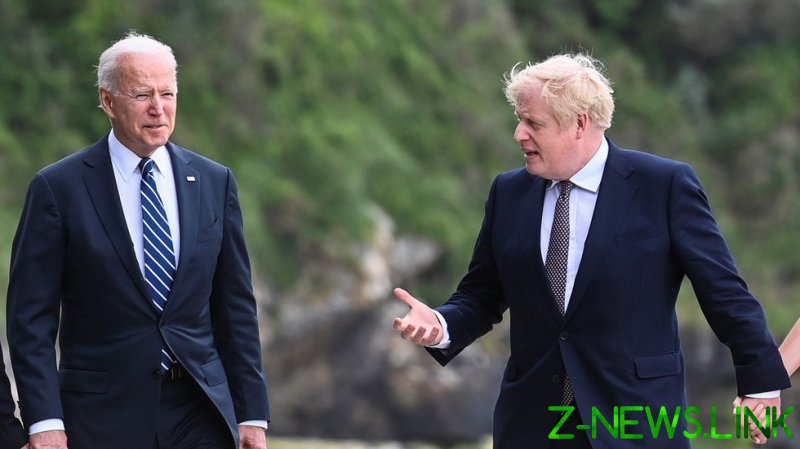 Biden and Johnson met in St. Ives, Cornwall, on Thursday, in a bilateral sit-down before the G7 summit kicks off on Friday. Though the two had plenty to disagree on – the impact of Brexit on the fragile peace in Northern Ireland for example, they seemed to emerge from their meeting the best of friends.

Johnson described dealing with Biden as “a breath of fresh air,” praising the Democrat’s desire to bring back classic Western-led globalism, after Donald Trump’s transactional ‘America First’ foregn policy. Though regarded as a good friend of Trump’s, and compared unfavorably to the former US leader by Biden last year, Johnson told the press that he was impressed by Biden’s willingness to do things “together,” be they “security, NATO [or] climate change.”

The two leaders set out their shared goals in a ‘New Atlantic Charter’. The document contains few surprises, affirming the commitment of the UK and US to democracy, human rights, and the rule of law – all terms regularly invoked, meaningfully or not, by Western leaders.

One paragraph lays out the two countries’ opposition to “disinformation or other malign influences, including in elections.” Other paragraphs promise increased counterterrorism cooperation, pledges to tackle climate change, and commitments to strengthen healthcare systems following the coronavirus pandemic.

The document was talked up by both Biden and Johnson as a “revitalized” (Biden’s words) version of a landmark agreement signed 80 years ago.

Signed by Franklin D. Roosevelt and Winston Churchill in August 1941, the Atlantic Charter laid the foundations for the new world order that would emerge from the devastation of World War II. The document cemented the US/UK alliance, preceded the formation of NATO, and promised the lowering of trade barriers around the world. Under the terms of the charter, colonial empires would be dismantled and wars fought not for territorial gain, but the disarmament of “aggressor nations” who threatened the new liberal order.

Positioning the UK and US atop a globalized world, the Atlantic Charter endured throughout the Cold War and beyond. The US, and to a lesser extent the UK, served as the world’s policemen and globalization eroded national borders, allowing capital and labor to move freely.

Democrat or Republican, Conservative or Labour, the leaders of the US and UK stuck to the text of the charter. Domestic policy changed, foreign policy was tweaked, but interventionism and free market economics reigned on the global stage. Discontent grew, and the election of Donald Trump in 2016 was in many ways a rejection of the world organized under the charter. Trump promised a withdrawal from foreign police actions, the return of trade barriers to shore up American industry, and alliances based on give and take, rather than ideological obligation. The Brexit vote too, which Johnson supported, was to many an attempt to reassert the UK’s national sovereignty, amid the ever-expanding authority of the European Union.

With Trump the first US leader to truly break with the post-war tradition of liberal globalism, it makes sense that Biden in particular would be keen to declare the return of that system. “We affirmed the special relationship between our people, and renewed our commitment to defending the enduring democratic values that both our nations share,” Biden said after the signing, a statement as bland as Trump’s demands that “delinquent” NATO allies pay their “fair share” was shocking.

Yet both Biden and Johnson would do well to remember that 2016 saw voters in the UK and US reject liberal globalism. While the public will undoubtedly agree with some provisions of the new charter – a commitment to fight terrorism, create jobs and enforce the rule of law, for example, in a world where even founding members of NATO are calling the alliance “brain dead” and the US’ allies are questioning the future of the liberal order itself – the charter signed on Thursday might be little more than a ceremonial paean to a system whose days are numbered.