Home / policy / Experts have noticed a serious change in the mass consciousness of Russians: rising aggression to power 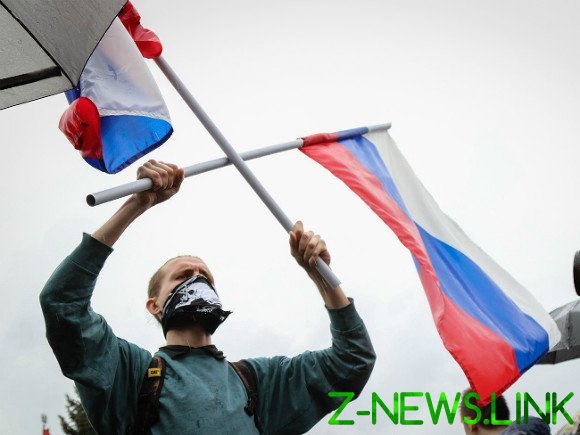 The mass consciousness of Russians is going through fundamental changes: the increasing aggression to power, almost disappeared a request for a “strong hand”, citizens are increasingly demanding their rights. To such conclusion the doctor of economic Sciences, member of the Committee of civil initiatives Mikhail Dmitriev and psychologist Anastasia Nikolskaya.

It clarifies Znak.com they are the team studying the public mood in Russia, a method that is somewhat different from the more usual opinion polls. It’s not quantitative, but qualitative sociological research, says the Agency. They conducted focus groups, personal interviews with people who know in advance that they have certain views.

According to Dmitriev, a significant change in attitudes began to occur in 2018. “Regardless of where were the official media, the official propaganda, the views of people have become more independent,” he said.

Dmitriev explained that to the forefront for people began to leave quite personal wealth, and the so-called “post-materialist” values, which is also confirmed by the data of other research centres: the “Levada”, “Zircon”, and many others. So, people became more interested in issues of legal state, individual rights and liberties, respect for political procedures, has increased the request for the policy and the request for justice. In addition, continued Dmitriev, people have become more critical of foreign policy, which developed during the “Crimean consensus”. They began to show an increased request for a peaceful foreign policy and to declare the desire to improve relations with all countries of the world, not engaging with them in any confrontation. These changes gradually began to appear in the political sphere.

For example, until the spring of 2019, the attitude of Russians to power while becoming more critical, but still remained relatively calm. But since this period, the researchers have already noticed the manifestation of more negative emotions, “readiness for action, including public protests”.

A number of studies, said Dmitriev has shown that the system of values of Russians began to shift towards the “more Mature, advanced formation”.

“First of all, is for the equality of all before the law, rule of law and on cooperation in the framework of the law as the basis of existence of society, — said the Agency interlocutor. — So, the situation with coronavirus we come in as in-depth of value conflicts between population and power.”

According to Anastasia Nikolskaya, if at the beginning of the isolation period was dominated by anxiety, now the overwhelming emotion people have is irritation, even anger. It is, according to her, quite focused on power.

“This is not about regional power, and about the Federal. And not even about the Federal government in General, but mostly about the President,” she added. According to Nicholas, the people’s faith in the ability of the Federal government and President to take some decisions in order to cope with the situation, just over a month has fallen dramatically — by 3.5 times. Now that the head of state is able to cope with the situation, I believe “in our survey” only 3%, added Nicholas. However, according to experts, no sign of the demand for “strong hand” no.

As noted by Nicholas, studies have shown a growing interest in politics: “who was until recently apolitical, those increases interest in politics”. “Naturally, we ask the question: why are you it was interesting? A: well, the policy was to affect my life,” she explained.

“Power has become something completely unauthorized. There’s us, and there are they, and from them we don’t want anything else,” continued Nicholas. She cited the example of a conjugal relationship, they sometimes comes to scandals, to domestic violence or to divorce. “I have a feeling that we, the society, to file for divorce,” said Nicholas.

Dmitriev, in turn, indicates the uniqueness of the situation. “All previous crises, including the first after Perestroika and the collapse of the USSR led to the deterioration of political moods in society very late… what is happening now, much breaks this picture because of sharp deterioration of political attitudes we are seeing from the very beginning of the crisis, in the first month of the fall of income due to quarantine. It is very unusual,” said he. Unusual and a sharp increase in aggression to power, interest in political life, requests for change of the political system.

“I have a hypothesis, which greatly influenced the quarantine. Very simple: in the past crises were all busy surviving, all the strength left to adapt to the decline in living standards, but about more abstract things start to think, when life begins to improve and it appears time. Now everything coincided: the deterioration of the financial situation and fears of a pandemic, and quarantine. A quarantine is primarily a change in the balance of time people. Many everyday classes that spent time, people just disappeared. And there was time to think. And since the quarantine has caused a sense of isolation, fear, annoyance, this somehow translates into aggression. That is all, now, immediately, splashed out on the power”, — explained the expert.

However, the exact answer, what all of this ultimately can result, experts do not give. However, pay attention to the fact that the government itself with “great concern” watching what is happening and can react very nervously and make a lot of mistakes, involving the escalation of the crisis. “So the fact that the crackdown can be a productive response to this situation. This is an additional factor of uncertainty in future developments, and the government itself does not know how best to act,” — said Dmitriev.

In his opinion, a month and a half was a critical moment, which greatly weakened the impact of the old hierarchical methods of social control and even the old forms of interaction. “People will not return completely to the old society,” he said.