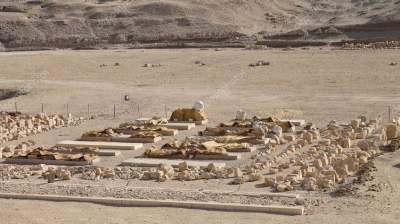 The tomb is located near Luxor.

Egyptian archaeologists have discovered a previously undiscovered ancient Egyptian tomb on the West Bank of the Nile at Luxor.

Scientists need to clear the entrance to the tomb. According to the head of the Department of antiquities of Luxor Talaat Abdel Aziz, the front door damaged.

Further researchers of antiquity need to get into the tomb to determine its age and the name of the deceased in her man.

We will remind, some time ago scientists have found in the same area of the tomb of the ancient Egyptian of the gold dealer, which is about 3.5 thousand years, and a mass grave of the poor of the era of Ancient Egypt.

New archaeological finds were made on the West Bank of the Nile in Luxor, where the burial of Egyptian pharaohs.