About 16,000 people ordered to evacuate in St. Vincent amid fears La Soufriere volcano will EXPLODE any minute (VIDEO, PHOTO) 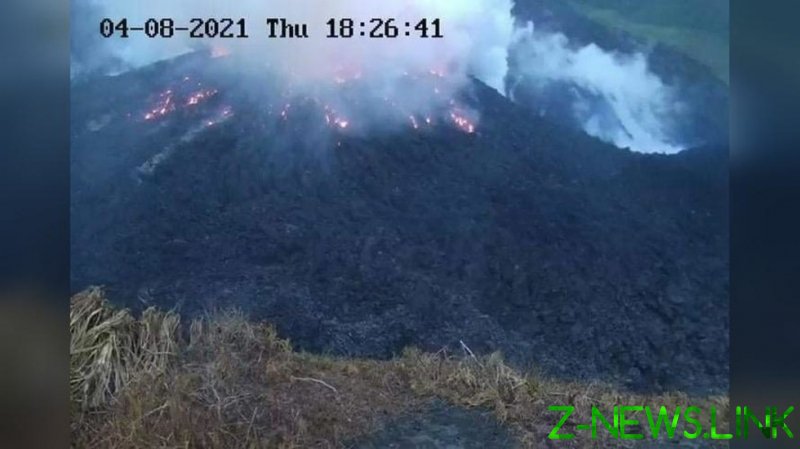 Some 16,000 people living in the vicinity of the La Soufriere volcano in the so-called “red zone” will be evacuated, either to safer parts of the island or to a cruise ship, the authorities announced Thursday.

While the volcano has shown seismic activity since December 2020, in the past few days it has gone up a notch, prompting fears of an imminent and potentially devastating full-blown eruption.

Footage posted by the University of the West Indies Seismic Research Centre (UWI-SRC) on Thursday  evening shows the dome of the volcano glowing and vapour clouds gathering around the summit.

The researchers recorded “six separate bands of volcanic tremor” on Thursday alone, noting that such activity usually means magma is nearing the surface of the crater. The volcano also spewed some ash, further fuelling reports that La Soufriere is on the verge of explosion.

“The effusive eruption is continuing and an explosive phase of the eruption may begin with very little warning,” the centre noted.

While seismologists could not provide a clear timeline of when the volcano might burst, UWI-SRC Geologist and Scientific Team Lead Prof. Richard Robertson warned that it would not come as a surprise if the volcano explodes “within the next 24-48 hours.

St. Vincent’s Prime Minister Ralph Gonsalves urged all residents on the volcanic island’s northeast and northwest to evacuate “with immediate effect.” Addressing the nation on Thursday, Gonsalves said that a Royal Carribean cruise ship would head to the area to take at-risk residents on board. However, not everybody could avail of the opportunity. The authorities signalled that only those who are vaccinated from the Covid-19 will be allowed to board the ship or be evacuated to nearby islands such as Barbados and St. Lucia that expressed willingness to house evacuees.

The caveat has prompted some observers to note that it would be virtually impossible for prospective evacuees to vaccinate in time if the eruption comes in a matter of hours.

Presumably, those ineligible to board a ship or travel to the other islands will be left to find designated shelters elsewhere on St. Vincent.

The last recorded La Soufriere eruption in 1979 led to no casualties, however, the previous one in 1902 killed more than 1,600 people.